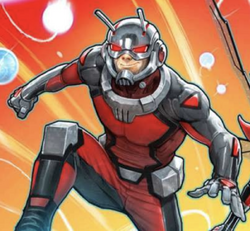 I've doomed the world... I deserve to rot in here.

Hank Pym was an agent of S.H.I.E.L.D. fighting against Apocalypse alongside his fiance, Janet van Dyne as Ant-Man and the Wasp. After S.H.I.E.L.D. fell, the two of them joined the Avengers and Ant-Man teamed up with his fellow scientist, Iron Man, to build an artificial intelligence capable of challenging Apocalypse.

After Ultron came online, he betrayed his creators and began establishing his own empire in Europe. After Iron Man attempted to bring down Ultron on his own and became his puppet, Ant-Man and the Wasp were both abducted by Ultron drones.

While Janet's body was repurposed to house Jocasta, Hank was imprisoned in Ultron's Citadel and kept alive as a trophy. He fell into depression after losing Janet and realizing he created a robot that could very well destroy the world.

Once Apocalypse's Armada began falling, Ultron took it upon himself to continue expanding his empire. This meant that he no longer felt the need to distract himself with his "trophies". In order to purge himself of this obsession, he murdered Hank Pym.

Retrieved from "https://marvelcomicsfanon.fandom.com/wiki/Henry_Pym_(Earth-9999)?oldid=246097"
Community content is available under CC-BY-SA unless otherwise noted.