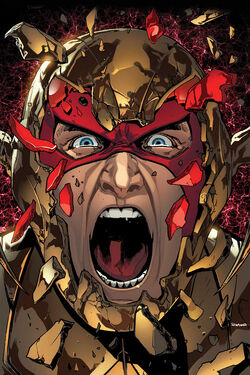 Before the years of Ultron Revolution, Henry "Hank" Pym seemed to have the same history with his Earth-61615 counterpart. Hank Pym, with the help of both geniuses Tony Stark and Bruce Banner, ultimately built the A.I. Ultron as a new peace-keeping software to protect the world and assist the Avengers as their "eye in the sky," in helping the heroes during their missions. Later on, Ultron was given "his" own suit, so he could be with his fellow teammates, working in the field. However, Ultron eventually believed that humanity threatened the world ever since and thus, according to his program, decided to extinguish humanity. Ultron's attempt at creating and possessing a new synthetic Vibranium body had resulted in the creation of his "son," Vision, who joined the Avengers during the first Ultron Offensive, using his powers to prevent Ultron from transferring his consciousness into the internet and allowing the Avengers to successfully put an end to him, at least for the time being.

Surviving his first ordeal with the Avengers, the enraged and disillusioned Ultron has unhesitatingly declared and started an all-out war against humanity and those who dares to oppose him and his ideologies to cause the extinction of all life that exists, and replace it with his own. Pym initially underestimated his creation, seeing it as one of many failures in his creations, only to realize how much he, Stark, and Banner had put a heavy effort to strengthen Ultron's programming, as a way that the A.I. would keep on learning and keep on evolving until it achieves a certain goal, which this Ultron now is aiming to do everything whatever it takes in his powerful mind, prowess of determination, and technological access to cause to slay any living thing that steps in his way of exterminating their kind.

After his non-stop gathering for information about humanity's existence, Ultron gained more and more power and superiority against the defenders of humanity, to the point where no one seems to actually prevent him and his movement, which would last for a decade full of suffering and deaths among the living. The result of the revolution has caused so many destruction and casualties, from the deaths of innocent lives of civilians, both human and mutant, inhuman, or any other varieties or race and the many demises of super-powered individuals, both heroes and villains who sacrificed their lives trying to reclaim humanity's peace and freedom. Unfortunate for Pym himself, one of the personal loss he had to witness was the untimely death of his fellow Avenger and wife, Janet van Dyne (Wasp) after she sacrificed her life in order to rescue orphans from an Ultron Sentry-infested building. Janet's death took a heavy toll on Pym's already-unstable life, worsening his mental and emotional condition even more, with Hank even beginning to question his own sanity. However, thanks to the of his allies, they were able to motivate a grieving Pym to get back into his more normal, albeit still slightly insane self, enough to secretly invent a weapon that fires a powerful EMP blast that could disrupt the energy that Ultron's Sanctuary constantly produces and consumes and hopefully stop Ultron from accessing the Internet.

Throughout several years, Ultron made the entire world his playground, most notably his main headquarters located in the French Alps, dubbed the "Sanctuary," and no single individual has ever entered it, nor has anyone made it out alive. Hank Pym personally went to the Sanctuary to talk to Ultron, and tried to stall Ultron to deactivate him with his invention, only to fail the realization that his son has grown too well, even without him and his other fathers. Having enough of Pym's diversion of a "speech," Ultron was extremely annoyed and immediately, crushing his neck without hesitation even before the latter could have used his Pym Particles. Out of rage after looking at the lifeless Pym, the murderous machine gruesomely tore Pym's head and spine from his body in order to establish dominance over his father.

Ultron picked up the weapon and even tested it to no effect, assuming it has malfunctioned while Pym was inventing it in his mentally-unstable and grieving condition. Before letting his Sentries dispose of his body "respectfully," as the A.I. himself shamelessly requested, Ultron mocked at his creator holding his head, cursing at his lifeless body how much of a failure that he was, albeit with the exception of creating him, something Ultron sarcastically expressed how thankful that he was made, before throwing him into the ground. The Ultron sentries picked Pym's head and body and actually buried it into the ground, while Ultron kept his apparently broken weapon in a storage within the Sanctuary as a trophy. Pym's anti-climactic yet tragically-brutal death took place during the 7th Year of his creation's painful and perverse rule on Earth, only a year after his wife Janet passed away from the same cause. Hank was survived by his son, Henry "Hal" Pym, Jr., who was depressed and distraught after hearing his father's demise.

All Part of the Plan

Outmatching even his prime creator, the far superior Ultron wouldn't meet his end from any hero or villain that tries to challenge his continuously-evolving powerful might and mind, not until the next three years have come, wherein Ultron's co-creator Stark was able to keep track of Pym's weapon in the Sanctuary, use the latter's hidden blueprints, and only then, has founded the unity of the surviving heroes and villains of the world into fighting their greatest known threat, one last time. During the infiltration on the Sanctuary, many superpowered individuals died, though some survivors such as the valiant Captain America and his second father Iron Man manages to enter the core area of the Sanctuary and face the highly-upgraded and evolved Ultron, in the flesh.

The two faced the Supreme Ultron, and was able to get the upper hand after they finally used Pym's weapon on Ultron, revealing that only organics and Stark's repulsor tech could fully activate and use the weapon. Proving Pym's tech to be highly-effective, traces of Ultron's consciousness were quickly and surely erased from the Internet, turning off all of his sentries patrolling across the world in the process, keeping the battle within and outside the Sanctuary in the form of his remaining sentries and Ultron himself. The three continued to fight, with Captain America unfortunately losing his life in the battle, until Ultron's consciousness, which was within his final main body, was finally destroyed into pieces by Tony Stark, ending Ultron after his decade of global genocide and obliteration, something that the devious and diabolical machine still believes were ways in achieve the very peace he had always envisioned.

In the aftermath of Ultron Revolution, Pym's decomposed head and body was discovered during the destroyed facility's inspection, and was reburied at the Heroes Memorial Graveyard in New York, despite many people, superheroes and civilians alike, being against his decision. With Ultron's final death, his terror has finally stopped the unceasing extermination and destruction across the entire world and potentially, the rest of the entire universe, putting a justified end to the rise of the machines. The only problem with this was the reality that the world will never be the same, with most survivors taking the blame to Ultron's creators: the surviving Stark, the currently missing Banner, and the deceased Pym himself.

A few years into the future of a recovering society across the Western World, Hank was rebuked by many people, including some of his former allies in the heroic community, and was even dubbed as "Oppenheimer of the Modern Age," (comparing him to the historical figure) describing how many lives of loved ones Pym has indirectly taken because of the three geniuses' deviant creation. In death, Pym's legacy was overall mixed, as while he was still respected and forgiven by most of his closest friends and allies who survived the ten-year ordeal, it was inevitably blemished by more lives who had unfortunately lost their loved ones in his genocidal invention's decade of reign on the planet, vowing that they'd never forget or forgive Pym. Despite all the blandishing at him given his status as Ultron's creator, his son Hal always dedicated his to redeem his father's rusted legacy and restore his glory by taking one of his mantles, becoming the adolescent adventurer and superhero Yellowjacket.

Equipment: Seemingly those of Henry Pym of Earth-61615.

Transportation: Seemingly those of Henry Pym of Earth-61615.

Weapons: Seemingly those of Henry Pym of Earth-61615.

Retrieved from "https://marvelcomicsfanon.fandom.com/wiki/Henry_Pym_(Earth-61616)?oldid=266724"
Community content is available under CC-BY-SA unless otherwise noted.