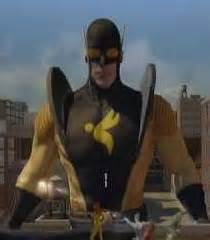 Little is known about Hank's life before the Masters of Evil's attack on the S.H.I.E.L.D. UNN Alpha Helicarrier. It can be assumed to be similar to his mainstream counterpart.

Hank Pym was on hand for technical support during the Ultimate Alliance's fight against the Masters of Evil.

During the Civil War, Hank assumed his Yellowjacket alias. He sided with fellow Avenger Iron Man in supporting the Superhero Registration Act.

He resumed his previous duty of tech support during the Secret Invasion, but still went into the field as Yellowjacket. After the Baxter Building mission: Pym, Iron Man, and Mister Fantastic started work on a device to distinguish humans from disguised Skrulls.

Retrieved from "https://marvelcomicsfanon.fandom.com/wiki/Henry_Pym_(Earth-6109.2)?oldid=128855"
Community content is available under CC-BY-SA unless otherwise noted.