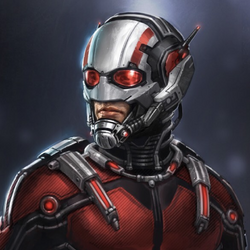 It's time to think bigger.

Hank Pym is a S.H.I.E.L.D. Academy graduate who spent years studying how to shrink and grow items by manipulating their molecular structure. His eventual success led to S.H.I.E.L.D. bringing him in as a field agent dubbed "Ant-Man". He was later paired with Jonathan van Dyne, who had managed to replicate Pym's tech and turned himself into Yellowjacket. Although initially the pair did not get along, they eventually fell in love and began working together as a well oiled machine.

Retrieved from "https://marvelcomicsfanon.fandom.com/wiki/Henry_Pym_(Earth-1420)?oldid=245033"
Community content is available under CC-BY-SA unless otherwise noted.