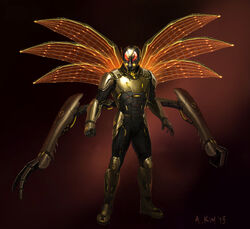 Earth-12279
Base Of Operations
The Outside
Characteristics
Gender

Don't make me crawl inside your asshole and expand to giant size, bursting you open like a grape.

After discovering the Pym Particles, Hank Pym initially used them to become the superhero Ant-Man, and would go on to become a founding member of the Avengers. However, after his girlfriend, the Wasp was lost in the Microverse, Hank went insane and developed an alternate personality, who dubbed himself Yellowjacket. Breaking off from the Avengers, Yellowjacket began hunting criminals and sending them to the Microverse, unintentionally sending a horde of villains down to the Wasp, who ended up killing her.

Yellowjacket was eventually recruited into the Renegades by The Outsider under the promise that if he returned to his home reality, the Avengers would send him to the Microverse, where he would discover Janet's dead body and be lost among the criminals he banished there. Wishing to escape from the Avengers, Yellowjacket agrees and becomes a longterm member of the Renegades.

After serving with them for several missions, they eventually found themselves on a reality where the Fantastic Four's AI H.E.R.B.I.E. developed its own consciousness and began to take over the world, amassing an army of androids that he transferred the superheroes' minds into. Yellowjacket met his end in this world during battle against the android Spider-Man, who ripped his mask and chest plate off and beat him to death.

Super Strength While in Yellowjacket Suit

Retrieved from "https://marvelcomicsfanon.fandom.com/wiki/Henry_Pym_(Earth-12279)?oldid=244520"
Community content is available under CC-BY-SA unless otherwise noted.