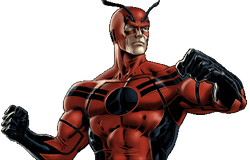 Jan! I'm fine. Oh, but I do need a favor. There's a couple of mercenaries out on the beach, I shrank them down. Can you just make sure the ants don't eat them? Thanks.

A young promising scientist, Hank Pym was recruited by S.H.I.E.L.D. to work as a consultant. He eventually discovered a type of particles that could shorten the distance between an object's molecules, effectively reducing its size while maintaining its mass. Utilizing the newly-discovered particles, Pym developed a suit that could shrink a human being to the size of an ant, yet maintain his original strength.

Pym also developed the EMP Communication Device, a device that allowed him to telepathically communicate with ants. Through concentration, he could manipulate and control ants into doing what he wished. He found it difficult to control bullet ants, but eventually learned to control them.

In 1987, a group of radicals in the Soviet-controlled East Berlin discovered a piece of an old HYDRA technology; the leaders of S.H.I.E.L.D. decided to send an agent to Berlin and stop them from reverse-engineering it. Howard Stark confronted Pym about giving S.H.I.E.L.D. his Ant-Man Suit. However, Pym was unwilling to give his suit to anyone else, so Agent Peggy Carter had to convince him to go to Berlin personally. To see if the suit actually worked, she fired a few bullets at Pym, and he became small like an ant in the blink of an eye.

In Berlin, Pym successfully snuck past the Berlin Wall only to be spotted by a guard dog. Pym managed to escape by jumping on an anti-personnel device which then fired him to safety. He made his way into the radicals' headquarters by controlling a flying ant. He discovered that the group had not even built the device yet. He then heard screams and found a group of HYDRA scientists torturing a prisoner. Pym intervened and defeated them, liberating the prisoner in the process. Back at the S.H.I.E.L.D. Headquarters, Stark thanked Pym and told him that was his last mission but Pym refused, realizing there were more problems in the world. Still only trusting himself to wear the Ant-Man Suit, Pym decided to continue to do field missions.

While in high school, Hank met Janet van Dyne, the bright daughter of the brilliant scientist Vernon van Dyne. The two fell in love almost instantly and started a stable relationship. She explicitly asked Hank to stop his superhero career, as he was risking his life.

Her petition caused Hank to quit S.H.I.E.L.D. and hang up his suit. Pym traveled to the under-construction Triskelion to meet with Peggy Carter, Howard Stark and Mitchell Carson, accusing them of attempting to steal his Pym Particles, which he deemed too dangerous. When Carson insulted Pym over his girlfriend's petition, Pym slammed his head onto the desk. Pym assured the board that as long as he was alive, no one would ever be allowed to use his technology.

Let me contact one of my colleagues. He's had some dealings with these people before. I'll email him and maybe he can help.

Hank Pym became friends with Erik Selvig and told him some information about his dealings with S.H.I.E.L.D.

Sometime after the Battle of New York, Hank and Jan joined the Avengers as Ant-Man/Giant Man and the Wasp respectively.

Retrieved from "https://marvelcomicsfanon.fandom.com/wiki/Henry_Pym_(Earth-1010)?oldid=183012"
Community content is available under CC-BY-SA unless otherwise noted.