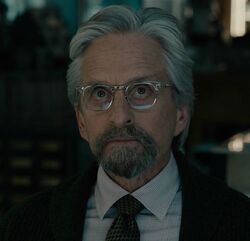 I wore that suit for years... it takes a toll on you.

Hank Pym was a S.H.I.E.L.D. scientist who was studying how to alter the size of organic material. This led to the discovery of the Pym Particle, which he imbued into a combat suit. S.H.I.E.L.D. dubbed him the Ant-Man, and began sending him on stealth missions across the world.

Eventually, during a mission in Hungary, he met and fell in love with a woman named Maria Trovaya. He took her back to America with him and eventually got married. S.H.I.E.L.D. did not trust Trovaya, which led Hank to retire from S.H.I.E.L.D. and hide the Ant-Man suit from them.

However, Maria was eventually assassinated by one of Ant-Man's enemies, which Hank believed to have been set up by S.H.I.E.L.D., which made him bitter and paranoid. Over the next few years, Hank resigned himself to his lab.

Eventually he hired a lab assistant named Janet van Dyne, who rediscovered the Pym Particle for herself. She and her boyfriend, Scott Lang, went on to become the new Ant-Man and the Wasp. He was reluctant, but eventually gave them his blessing. He even went on to start working alongside the Avengers to make new scientific breakthroughs to protect the world.

He and Tony Stark went on to create Ultron, which was supposed to be a peacekeeping program. However, Ultron betrayed them and went on to betray them and create a new body for himself called the Vision. When the Avengers stole the body from Ultron, Hank was killed in the ensuing conflict when Ultron blasted him directly in the chest. Ant-Man and the Wasp were devastated, and the Avengers swore to bring Ultron down to avenge him.

Retrieved from "https://marvelcomicsfanon.fandom.com/wiki/Henry_Pym_(Earth-101)?oldid=247854"
Community content is available under CC-BY-SA unless otherwise noted.