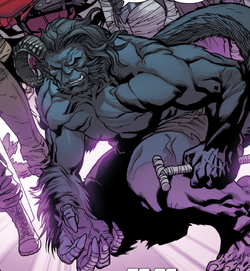 Earth-9003
Base Of Operations
The Nexus
Characteristics
Gender

I used to call myself the Beast to be ironic... to make a statement about how appearances can be deceiving. But that is no longer the case... I am a monster.

Hank McCoy was a gifted scientist who had dedicated his life to studying mutant genetics. This made him the perfect candidate for Charles Xavier and Erik Lehnsherr as they were putting together the X-Men. Hank was thrilled to be surrounded by other mutants, simply because he had always longed for DNA to study other than his own. He didn't want to advertise it to his team, but his goal was to develop a mutant cure.

Hank served with the X-Men for a long time, and eventually tested a version of the cure on himself. Initially, it seemed to work, only to almost instantaneously kickstart Hank's secondary mutation, as he developed blue fur all across his body and enhanced strength and senses. Seeing no other course of action, Hank accepted his status as a mutant and embraced his life as an X-Man, but his research was eventually commandeered by a man named Bolivar Trask, who weaponized the cure into his Sentinel Program.

As mutants began being cured all across the globe, Apocalypse, the first mutant, rose from his stasis, as he sensed his children needed him. He set out to recruit his Horsemen, recruiting the likes of Pyro, Darwin, and Trinary to act as his Horsemen of Famine, Pestilence, and War, respectively. However, he still lacked his most important Horseman of all; Death. The others informed Apocalypse that the cure could be traced back to Hank McCoy, and Apocalypse was able to sense his guilt and sorrow, offering him a chance to make amends.

Hank accepted Apocalypse's offer, and was mutated even further, having his mind corrupted by the power of Death. It didn't take Apocalypse and the Horsemen long to completely dismantle the Sentinel Program and murder Bolivar Trask, but they weren't stopping there. While heroes like the X-Men and the Avengers wanted to take some time to help human and mutantkind recover, Apocalypse made his play for power.

He and the Horsemen used their unique abilities to pillage the entire world, bringing countless civilizations to their knees. After facing endless opposition from the X-Men and the Avengers, Apocalypse set up shop on the abandoned island of Genosha and began developing a machine that could end all human life on Earth simultaneously. Beast had stood by his new master out of a misguided sense of loyalty, but Hank's conscience finally started speaking up again. As Apocalypse's project neared completion, the Avengers mounted their last attack on Genosha. Beast knew that Trinary was essential to completing the project, and in a moment of rebellion, Beast snapped her neck, essentially depowering Apocalypse's machine.

This crippled his plan, allowing for the Avengers to kill the other two Horsemen and take Apocalypse prisoner. Beast was granted amnesty, but he did not want forgiveness. He exiled himself back to Xavier's mansion in Westchester, which had long since been abandoned by the X-Men following Xavier's death at the hands of Apocalypse. For the next several years, Beast remained there, wallowing in his own guilt and self-hatred, until one day a group of Reavers launched a siege on the mansion, intent on killing him and stripping Cerebro for parts to sell on the black market.

Beast put up a half-hearted fight, and was eventually consumed by one of the Reavers' energy blasts. However, rather than dying, Beast woke up in the Nexus, surrounded by alternate versions of his former teammates; Cyclops, Jean Grey, Iceman, and Angel. He was confused, but confusion turned to rage when he saw Apocalypse. He immediately attacked him, and was joined by the young Cyclops, only for the Silver Sentry to arrive and explain that each of them were from alternate realities, and had been selected to serve on Team X to fix the cracks in the multiverse.

Beast accepted, taking any excuse to help right wrongs in an attempt to make amends. He was eager to get to know the other versions of his teammates, but was hesitant to get close to any of them, as he couldn't trust himself. Cyclops was the nicest to him, and Beast admired how kindhearted the young boy was, despite everything he'd been through on his world. Although he knew the Apocalypse on his team truly held the consciousness of Charles Xavier, he found it impossible to trust him, and felt a boiling rage every time he even looked at him. It just reminded him of all the evil acts he'd committed while in service to Apocalypse.

After Team X had two fairly successful missions with no fatalities, they found themselves in a world not dissimilar from the one Hank emerged from. That reality's version of Hank McCoy had been driven insane by his mutation, and was attempting to use the mutant cure to eradicate the entire mutant race. Beast confronted himself and tried to reason with him, but he was too far gone. He had rewired Cerebro to send out a shockwave that would psychically inhibit all mutants' minds, depowering them by essentially rendering them braindead.

As the rest of Team X worked towards disabling Cerebro and saving any high risk mutants, Beast engaged in battle with his alternate self. The only way to activate Cerebro was for Hank to use his unique DNA sequence, so Beast kept him as far away from Cerebro as possible. Their fight eventually led them into the Blackbird Hangar, and after his alternate self put up a bloody fight, managing to break Beast's bad leg and even impale him with his own walking stick, he devised a way to stop him. Goading Hank's intelligence, Beast was able to get him monologuing about the "ugliness" of mutantkind, to give him just enough time to set the Blackbird to self-destruct, killing both of them in the process.

Retrieved from "https://marvelcomicsfanon.fandom.com/wiki/Henry_McCoy_(Earth-9003)?oldid=255245"
Community content is available under CC-BY-SA unless otherwise noted.