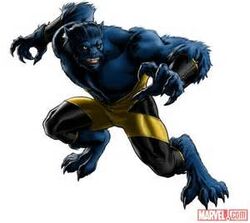 Little is known about Beast's life before the Secret Invasion. It is assumed to be similar to his mainstream counterpart.

Hank was one of the many superhumans contacted to join the Ultimate Alliance to combat the growing Skrull threat.

Equipment: The Beast possesses a fully-equipped laboratory in Xavier's mansion. Presumably it holds the latest in biological and material analysis devices. It may also contain Shi'ar technology.
Transportation: Blackbird, Quinjet
Weapons: While known to use heavy weapons in battle, The Beast prefers to fight bare-handed.

Retrieved from "https://marvelcomicsfanon.fandom.com/wiki/Henry_McCoy_(Earth-6109.2)?oldid=255254"
Community content is available under CC-BY-SA unless otherwise noted.