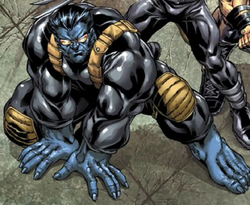 Earth-554
Base Of Operations
The Outside
Characteristics
Gender

I used to look up to my world's Scott Summers like he could do no wrong. And then he committed genocide on a scale no one had ever seen before. Nothing really surprises me on this missions anymore.

Hank McCoy was one of the founding members of the X-Men and best friends with Scott Summers. After spending many years with the X-Men, Scott went insane and developed a pathogen that would target human DNA and eradicate it. Killing nearly 75% of the Earth's human population, Beast joined Captain America and the Avengers to lead a refuge of humanity on an island dubbed Utopia.

Beast was recruited into the Outsiders under the promise that the pathogen would evolve and begin targeting mutant DNA as well, eventually completely wiping out life on Earth. Beast was more than willing to become an Outsider to solve problems on a grander scheme.

He served a long tenure with the team until meeting a tragic end when the team was tracked back to the Outside by an alternate version of Annihilus who possessed an Infinity Gauntlet, and killed Beast before being defeated by the other Outsiders.

Retrieved from "https://marvelcomicsfanon.fandom.com/wiki/Henry_McCoy_(Earth-554)?oldid=255241"
Community content is available under CC-BY-SA unless otherwise noted.