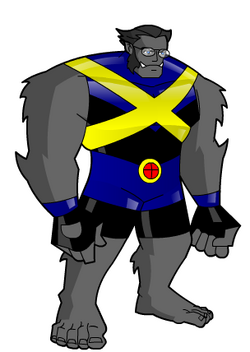 This is a much more cat-like form! Is this a secondary mutation? What could possibly inspire such a change? Luckily for me, I am most qualified to find out!

Henry McCoy was born to Norton McCoy and Edna McCoy. Norton worked with radiation frequently, and his DNA was altered due to this. This same radiation would later make Norton become insane, and adopt the identity of the terrorist known as the Radioactive Man. But Henry was born without any issues, though hints of his mutant power were visible since birth.

From birth, Hank proved that he was very smart. His favorite toys were chemistry sets and books. His intelligence increased rapidly, and when he turned 13, so did his strength. He soon joined his football team, and with his strength and smarts, he became the most popular kid in school with everyone, jocks and nerds alike.

Soon, it was suspected that Hank took steroids. After investigation by his coach, it was revealed that he was a mutant. He was soon kicked from school and the team, and everyone jeered him for being a "piece of mutant filth." This brought attention from Charles Xavier. He came to Hank, informing him that he was indeed a mutant, but that by no means was he filth. He happily joined the team, wanting to change the public views on mutants.

In the few days he was there, Hank made friends with everyone on the team. Iceman didn't like him, though, since he only spoke in "smart." But they were a close knit team nonetheless, and Beast loved what he was doing. But soon, tragedy struck the team. When they fought the Brotherhood, Cyclops tried to shoot Quicksilver and missed, taking out both of them, along with Mastermind and Jean Grey. This loss deeply affected Beast, and it began the stress that eventually led to the change into his secondary form. Even on Krakoa, Hank was worried. He was unsure of whether they could escape, and this caused the furry form to escape. He fought well, and made it home.

In this new form, he was more depressed than usual, and he lost hope in Xavier's dream. He left the X-Men, but he didn't stay out long. Soon Archangel realized that they were needed, but they wanted to form their own team. They decided to call it X-Factor, and he and Iceman joined. But Cerebro had one condition for their team. He would allow them to operate however they wanted, provided they allowed clones of Scott and Jean to join. They all fought him on the subject, Beast calling it inhumane. Charles reminded them that if they refused the clones, he would refuse X-Factor. Reluctantly, the clones were allowed in, and Hank disabled some spy gear that Cerebro installed in them.

Super Strength: Beast is able to lift in excess of 12 tons.

Super Speed: Beast has peak human speed when running, and can reach 40 MPH running on all fours.

Super Stamina: Beast can fight for hours before fatigue begins to impair performance.

Super Durability: Beast is resistant to super-strong punches and falling from great heights.

Super Agility: Beast has the combined agility of an ape and an Olympic gymnast, and he can walk on his hands or a tightrope for hours.

Healing Factor: Beast can recover from minor diseases in an hour, and major ones in a few days. He also can heal most cuts instantly. Beast's healing factor is almost, but not quite, as good as that of Wolverine.

Super Senses: Beast can see farther than most people can, and can track people by their scent.

Claws and Fangs: Beast has claws and fangs that are capable of shredding tissue and wood, sometimes even stone.

Genius: Henry is an expert in general sciences, chemistry, genetics, and the overall sciences of mutation.