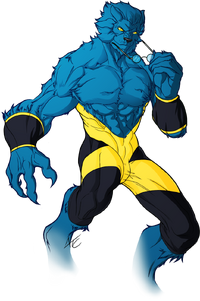 Hank was born to Norton and Edna McCoy, as a child he was born with large hands and feet and was superhumanly intelligent. His parents realized they had given birth to a mutant and due to fear of him suffering prejudice, he was heavily sheltered.

In 2006, shortly after his eleventh birthday, his parents discovered a school for mutants like Hank and decided to contact Charles Xavier and enroll him at the school where he can be with people like himself without the fear of being looked down upon.

Hank remained at the school for many years until he graduated in 2013, at the age of eighteen.

Upon returning to the world and attempting to work in the field of science, Hank was met with prejudice against his mutation. After months of being rejected, Hank began to feel ashamed of his condition, he developed a cure for his mutation and instead of acting as a cure, it triggered a Secondary Mutation in Hank and he began to grow fangs, claws, a snout, cat-like eyes and blue fur all over his skin.

Even more ashamed at what he had become, in late 2014, after the Galactus Event, Hank returned to Xavier School For Higher Learning in hopes of getting a teaching position. Eager to have Hank back, Charles agreed and welcomed his former student back with open arms.

Hank would later join the X-Men.

After a day of relaxation, rest and being treated well by the Wakandans, the X-Men were ready to help defend the Royal City from Klaw. When Klaw and his mercenaries arrived the Black Panther would go on to fight Klaw on his own while the X-Men would combat the mercenaries. The X-Men would eventually defeat the mercenaries and save the Royal City, shortly after Black Panther would return with Klaw's unconscious body and thank the X-Men for helping him and declared them friends and allies to Wakanda.

Genetic Atavism: It is possible that Beast's mutation is a result of genetic atavism (or genetic traits that resurface in a species after many years of dormancy). He also possesses neotenous (or traits in a descendant that resemble those of an ancestor organism) characteristics, which would explain why he has a big modern brain with an ape-like physique.

Due to Secondary Mutation, Beast transformed from his original ape-like physique to a more cat-like physique.

Genius Intelligence: Dr. Hank McCoy is one of the eight smartest people in the world. He has six PhDs, including one in biophysics. A world-renowned biochemist, Henry McCoy's greatest asset is his keen scientific mind. As the X-Men's resident technological and medical genius, he possesses extraordinary expertise in genetics, biochemistry, and electronics

Excellent Hand to Hand Combatant: The hyperactive, bouncing Beast is an excellent hand-to-hand fighter. He gained his initial combat training from Professor Xavier. He typically uses a freestyle form of combat, similar to that of Spider-Man, that allows him to make full use of his great strength and agility. During times of anger, however, the Beast is known to resort to brawling and street fighting tactics.

Multilingual: He is fluent in several languages including English, German, French, Latin, Italian, Spanish, Japanese, Arabic, and Russian as well as Latverian.

Expert Tactician: He is a capable leader as he has led his own team of Defenders with fellow X-Men Iceman and Angel as teammates. Even when he is not the leader of a team, he has been a key member in some of the greatest team accomplishments, such as helping to rescue Nova on Mars with the Secret Avengers. He is also a great team player.

Indomitable Will: Hank's dedication to science and co-existence between humans and mutants is unwavering. He never gave up on finding a cure for the Legacy Virus in which he eventually did find a cure. He has great compassion for both humans and mutants alike, and his unflagging courage allows him to protect both of them at any cost, even with his own life.

Vulnerable Senses: Due to his animal-like mutation, the only other "weakness" that Beast has is the fact that his heightened senses can be taken advantage of.

Retrieved from "https://marvelcomicsfanon.fandom.com/wiki/Henry_McCoy_(Earth-1111)?oldid=255243"
Community content is available under CC-BY-SA unless otherwise noted.