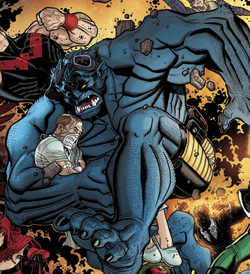 My hubris got the better of me. I thought I could cure myself of, what at the time I thought was a curse. In the end, I only ended up speeding up the process of nature. I've had a lot of time to sit with it, and I've come to the conclusion that I wouldn't change anything about myself. My name is Hank McCoy, I am a mutant, and I am proud.

Hank McCoy's father always wanted him to be a star football player. He was disappointed when Hank found himself drawn more to the realm of science. However, as Hank reached puberty and his mutant abilities began to manifest in the form of his feet and his muscular build, he decided to join the football team to make his father proud.

He was later offered countless football scholarships, but his heart just wasn't in it. He instead chose to turn them down and study genetics, out of hopes to better understand what was happening to him. However, this choice caused his father to cut off communication between them. Hank hoped that if he could find answers and become famous for it, his father might still be proud of him.

Eventually, Hank was approached by Charles Xavier and Erik Lehnsherr, who offered him the chance to live among other mutants. Hank enthusiastically accepted, and almost instantly developed a crush on Jean Grey, while forming a strong friendship with Warren Worthington.

Despite feeling more comfortable than he had ever been, Hank still wanted to uncover the secrets behind the mutant genome out of hopes that he could reverse it. It was only after Magneto and Mystique left the others behind that Hank thought he'd finally made a breakthrough. Unaware that Professor X was in the process of being kidnapped by Magneto, he tested it on himself. For a split second, it seemed Hank had been successful. However, he only came to discover that it sped up his mutation, and transformed him even further, coating him in blue fur and further altering his appendages to increase his strength and agility.

Horrified, Hank didn't know what to do. At first, the other mutants couldn't recognize him, and almost attacked him, until Jean read his mind and cleared the air. Hank became depressed and saw himself as a liability, but after convincing from Scott Summers, he decided he could use his abilities to help the Professor. From then on, he took on the moniker of Beast, and wanted to dedicate his life with the X-Force to helping young mutants accept themselves for who they are.