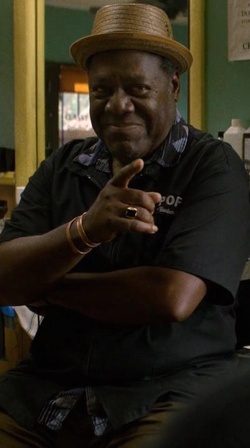 What would have happened in my life if people gave up on me? I was no angel, no I was a beast. I was a beast, no two ways about it."
"They call you Pop because you were the old G?"
"Nah, it was the sound my fist made when I knocked a fool out. Snap, crackle, pop.

Henry Hunter was Pop's real name. He gained the nickname name Pop due to the sounds of punches he made. In the past, he grew up in the street along with Cottonmouth and Fredo Diaz. They were beating up people to steal cash. Once, they were taken picture by Jamel Shabazz.

He eventually got straight, opened a barbershop and became a respected figure in the neighborhood.

Retrieved from "https://marvelcomicsfanon.fandom.com/wiki/Henry_Hunter_(Earth-1010)?oldid=191011"
Community content is available under CC-BY-SA unless otherwise noted.