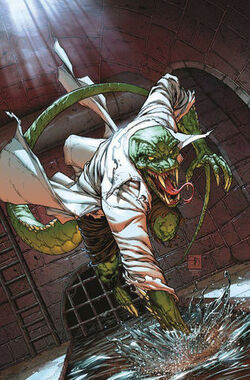 You wouldn't like me if you met me when I was a youngster. I can see that your Mutant powers vary. Flashy, and amazing, yes, I admit it. But I suffered worse than all of you, except you. Being a Mutant's not easy, I know. But I think I got a nightmare being a Mutant, and it terrifies me. But now, no matter what'll happen, I'll devout myself to the justice of our kind, the Mutants.

Henry Connors' life was filled with horrifying moments, and injustice, mostly, due to his Mutant status, and powers. While some Mutants are lucky enough to gain powers that don't alter their physical appearance much, Connors was seemingly one of the Mutants that suffered the most due to his powers. In his family line, it's unknown if they possess X-Genes or no. But when Connors was born with his brother, Wilhelm, he's the only one who was deemed a freak. His brother was born normal, a human. While Henry, was born with... reptilian traits. His Mutant nature made him an abomination for others he tried to befriend with. In childhood, Henry never got a care as good as his brother, Wilhelm, from his parents. His parents were afraid of Henry, and had a strained relationship with him. To hide himself from the society, Henry was placed under a private tutor, but somehow, managed to become an individual of great knowledge. His brother on the other hand, was lucky enough not to be as hideous as him, but was jealous of his knowledge.

Henry was lucky enough to be inserted into a college, but due to his "insane" Mutant nature, he's an outcast. He's smart, yes, but his Mutant traits began to advance as he grew up. He became stressed out to the point that he left the college when his mutation went "out of control" that he actually grew a big tail, as well as claws. Connors went off-the-grid until he grew up into an adult, where he transformed into "the Lizard".

However, Connors will soon discover that he can be among other Mutants, as well. Connors, 35, was somehow "targeted" by the "X-Men" in their second attempt of "proving themselves and helping the society". The X-Men, that time, consisting of Magneto, Colossus, Spider-Man, and Whirlwind (the others were guarding the X-Mansion), were tasked by "a former neighbor of Erik" to eliminate what seemingly is a "hideous monster" (actually Connors) in the sewers near his home. Connors senses the X-Men first, and assaulted them, as he heard Whirlwind's statement of "eliminating the monster". However, Connors stopped attacking them when he heard that they all are Mutants. Connors however, told them about his "agony of being a monster". Magneto then offered Connors a place in the X-Men. After hearing that, Spider-Man said that "our fellow friends might pound on him when they see him". An argument happened for a while, but Connors later accepted Erik's offer. While his existence among the X-Men made him a "liability", he quickly became a trustworthy figure, and a chief scientist in the X-Men, deemed to be the smartest among the Mutants.

Henry is a master scientist, even considered as the smartest member of the X-Men after he joined the team (previously, Spider-Man was deemed the smartest one next to Magneto himself). He's an expert biologist and physicist, and sometimes, inventor. While Connors isn't an accomplished combatant, he uses the technique of street fighting to use his powers to full extent.

Connors' lifting strength has a range of 15-20 tons.

While Henry's regeneration is advanced, it can be slowed down using various types of acid. Depending on the amount of acid "placed" on Connors, the acids can slow the regeneration to the point that he could not regenerate anymore, eventually, harming Connors. Also, while the healing is stopped, Connors can't regenerate his limbs, and gets his pain tolerance level lowered.

Equipment: Miscellaneous scientific equipment provided in the X-Mansion, his lab coat.
Transportation: The X-Jet.
Weapons: His claws and tail.

Connors was 35 when he joined the X-Men, making him the oldest member in the initial X-Men lineup.

Retrieved from "https://marvelcomicsfanon.fandom.com/wiki/Henry_Connors_(Earth-4045)?oldid=259049"
Community content is available under CC-BY-SA unless otherwise noted.