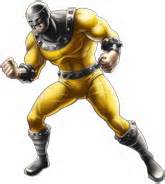 Little is known about Bulldozer's life before the formation of the Masters of Evil. It can be assumed to be similar to his mainstream counterpart.

Bulldozer and the other Wrecking Crew members (Wrecker, Thunderball, and Piledriver) were among the Masters of Evil that attacked Asgard they were sent to guard the bridge leading to earth, but they were defeated by the Ultimate Alliance and placed in S.H.I.E.L.D. custody.

Equipment: Bulldozer has a specially-made armored helmet, neck and shoulder apparatus that gives him added protection and invulnerability when ramming an opponent. The helmet partially affects his peripheral field-of-vision.
Transportation: None known.
Weapons: None known.

Retrieved from "https://marvelcomicsfanon.fandom.com/wiki/Henry_Camp_(Earth-6109.2)?oldid=190625"
Community content is available under CC-BY-SA unless otherwise noted.