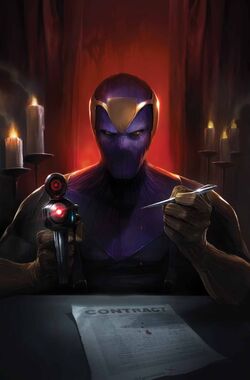 What have you ever done...to earn redemption...? I know I haven't done enough to earn mine... But I'm willing to do more...

Helmut Zemo, born at some point between the middle and late 1970s, is the thirteenth Baron in the German Zemo family lineage. Following his father’s footsteps, he became the Baron of Germany after his father's death, doing all his very best in correcting all of his father's wrong deeds. Before the rightful heir of Baron was given to him in his adulthood, Zemo grew up and enlisted in the local armed forces to be both a German and Sokovian intelligence officer and commander of EKO Scorpion, an elite Sokovian and German allied paramilitary tactical unit, having been deployed and commissioned mainly on a former military base in Novi Grad for years before he was eventually honorably discharged into retirement. Helmut and his own family lived a happy life in the city of Leizpig, his birthplace, and even maintained good relationship with his father and mother in the peaceful German countryside.

He furiously sought revenge against S.H.I.E.L.D., Hydra, and especially the Avengers themselves after unfortunately losing his entire family after a group of small surviving fleet of Chitauri (at some point after the Chitauri Invasion) had somehow arrived through a Tesseract-summoned wormhole and raided a portion of their nation, destroying half of their buildings and other structures and taking too many lives for him and his surviving people to handle. It wasn't long after this tragic incident that Helmut had found out the terrorist organization Hydra, who recently revealed its existence to S.H.I.E.L.D. during its Uprising against the S.H.I.E.L.D., was responsible for unleashing this small fleet of Chitauri into his homeland, feeling that it had to do with his father's last moment of betrayal against Hydra in the end of the Second World War.

Motivated to avenge his family's unexpected tragedy, Helmut was publicly declared dead by the media and authorities due to suicide and had set about his plan to tear apart S.H.I.E.L.D. and Hydra by joining as one of S.H.I.E.L.D.’s undercover agent by the name of Mark Gruler and joined as one of Hydra's highly-skilled assassins just so he could steal all the organization's information which started the Hydra Uprising and it's alleged downfall that also started the Nimrod Crisis, which he participated in, a prelude event during Ultimate War. This eventually led for the government to start the Superhuman Registration Act, which inevitably started the Superhuman Civil War, only a few months later.

He also led his own Masters of Evil and formed and lead the "Thunderbolts" mercenary superteam, where he met and formed a romantic relationship with fellow mercenary Melissa Gold, who is also often known as the villain-turned-hero Songbird, whom he would later proposed to, after ending his villainy, in a much later time after the intense follow-up heroic conflict that he consequently caused, the Great Superhuman Civil War.

He later revealed his real identity to Captain America as the new Baron Zemo and told him that he caused all of the Superhuman War as an act of revenge against the "corrupt" and "tyrannical" united government and S.H.I.E.L.D. for not helping the ruined nation of Germany to rise again from the Chitauri Invasion, but was later defeated and imprisoned for indirectly causing all of the following wars to happen. Rogers responded that he was very sorry about the loss of his family and some of his people, but that they shouldn't be blamed for their demise because they were doing the best they could to help the lives of the innocent, and finally explained that Helmut still has to pay the price for his ruinous acts for almost causing the Third World War. Time after time, Helmut would finally realize and regretted what he has done, had changed the world forever, albeit still believing that he had somehow successfully avenged his family's death in the process.

A Seed of Redemption

After several months, and almost entire year, of imprisonment and interrogation by S.H.I.E.L.D.'s custody, he was later freed by the remaining members of his own founded team, the Thunderbolts (formerly the Masters of Evil), which was led by his fiancee while he is not around leading the team. He later had a change of heart and became a more heroic man, even rejoining the Thunderbolts with even more heroic intentions and wanting to make amends for his former villainous deeds since the prelude to Ultimate War and its consequence, the Civil War. Zemo and the Thunderbolts would later cross paths with Secretary of State Thaddeus "Thunderbolt" Ross, the Red Hulk, who ordered a country-wide search and seizure after his escape by his teammates, though Helmut himself came with a proposition to avoid a lifetime of incarceration by joining forces with the agencies of the government on dealing with every uncompleted task that they found difficulty in accomplishing, tasks including the hunt for the surviving fragments of Hydra, secretly thwarting cosmic & mystical threats, and several more. Ross was intrigued by by Zemo's devious and convincing suggestion since the latter knew how helpful the Thunderbolts would be if they helped government intelligence, leading Ross to eventually convince the President to sanction the Red Code Initiative, gathering a new set of additional members in the form of other anti-heroes Ross had personally recruited, albeit they were also given the ulterior motive to watch over the Thunderbolts whether they'd try and do something funny, much to Zemo's chagrin since he deemed it unnecessary. Nevertheless, he and the rest of the Thunderbolts were forced to comply with the official conditions of the alliance; otherwise the contract would be through in an instant. Reluctantly agreeing with the conditions, a brand new incarnation of the Thunderbolts strike team was co-led by the Red Hulk as their field leader, with Zemo being its main tactician and strategist.

Decelerated Aging: Inheriting his father's Compound X Serum after injecting it into his body, Zemo also has the enhancing effects of the serum within his system which naturally retained his youth and vitality, despite his considerable chronological age.

Equipment: He sometimes wears circuitry in his hood guarding against psychic assault, and occasionally uses weapons or traps incorporating his father's Adhesive X, which forms an unbreakable bond with any substance unless it is subjected to a special solvent.
Transportation:

Weapons: Zemo makes use of much of the same devices invented by his father, including particle, formula, and adhesive X, as well as his dad's disintegrator gun and anti-psychic headband. In close-combat, he prefers an Adamantium sword. He also makes use of various energy weapons and mind-control devices.

Retrieved from "https://marvelcomicsfanon.fandom.com/wiki/Helmut_Zemo_(Earth-61615)?oldid=267294"
Community content is available under CC-BY-SA unless otherwise noted.