Kate Bishop sat up and looked around.

For a second, some part of me thinks, “I should be ashamed.” I think that part of me is really stupid. Do I just get the hell out of here? Do we go for breakfast? Where does he keep the coffee? What did he say his name was?

She approached the window and slowly started moving the curtains.

Outside of the window, she could see planet Earth. They were in space.

-The ride here did seem kinda long.- She told herself.

-Did I wake you up, Kate Bishop of Earth?- The shirtless man behind her asked, drying his blonde hair with a towel.

-No, you didn’t… Er… Norman?- She turned around to face him.

-Noh-Varr.- He replied, walking away from her and picking a vinyl from his shelf.

-Oh, yeah! You kicked all our asses that one time! Billy, Teddy, everyone! And… You were an Avenger? Marvel Boy? The Protector?-

-Both. Neither really worked out. My people ordered me to stay away from Earth. The Avengers felt similarly. Which was fair. I didn’t exactly do myself proud.- He said, placing the vinyl on the turntable.

-So why are you still here?-

-IT IS!- The alien started dancing around. -Kate, I come from a dimension where there is transcendental peace and universal enlightenment. But there are no close harmony girl groups. How could anyone leave a world that makes things as wonderful as this?-

I lie in the strange bed and watch this beautiful alien boy dance to the music my parents loved, and think… This is everything I always hoped for. At which point the Skrulls attack.

A group of Skrulls wearing space suits approached the Kree vessel, ready to attack. Noh-Varr pointed at where the cockpit is and told Kate to start piloting the ship. The Kree opened a drawer and pulled out his Nega-Bands, which had been made by the Supreme Intelligence itself. The bands, following his neural orders, transformed into a pair of guns. Kate entered the cockpit but she found technology she had never seen before. The young woman sat on the pilot’s chair and a pair of handles appeared before her. Smirking, she grabbed them and outmaneuvered a blast from a Skrull heavy gunner, while Noh-Varr fired at the soldiers.

I have no powers and not nearly enough training, but I’m doing this anyway. Being a superhero is amazing… Everyone should try it.

-What was that?- Kate laid down on the bed once they got rid of their attackers.

-Skrulls. Long-time enemies of the Kree.-

-Yes, I have been told about the war between you.-

Noh-Varr sat down next to her. -Yeah… I was tasked to join the 18th Kree Diplomatic Gestalt, an attempt to keep the cease-fire between both races, but that wasn’t really what I wanted. I was adamant about destroying the Skrulls… To see my race emerge victorious. Then, I only cared about destroying Earth…-

-Now I want to protect Earth… From both Skrulls and Kree.-

She sat up as well, intrigued.

-Last time I was here… I met a Skrull spy, Khn’nr, who was posing as Mar-Vell.

-Yeah. He had been sent here to take down humans from the inside. But he fell in love with this planet and its people. After the real Mar-Vell had been captured by Ronan and his Accuser Corps, Khn’nr traded places with him. Eventually, the Kree found out and when he was trying to escape, they killed him. I met him on his deathbed and ever since… I have been moved by his words. And I’ve learnt to love Earth just like he did. He asked me to protect you from this bloody war… And I will do so.-

Kate smiled and rested her head on his bare shoulders. -Thank you.- She whispered.

Suddenly, Noh-Varr stood up and walked to the window. -Oh, no…- He muttered.

-What happened?- Bishop followed him.

-It’s Kasius’ ship.- Marvel Boy explained. -He won’t stop until he takes Earth for himself.-

-He was once a member of a respected and influential Kree family. He was given command of a fleet and sent to fight against the Skrulls. However, he failed and cost the Kree Empire a key strategic outpost and the lives of thousands of warriors, which disgraced Kasius’ name. his own father banished him from Hala, leaving his brother Faulnak to take his place.-

-And he wants to regain his good name and prove himself a worthy heir?-

-You learn fast, Kate Bishop of Earth.- Noh-Varr smirked. -Stay here, I’ll try to communicate with him.- Then he walked to the cockpit. -Plex, get me in contact with Kasius’ ship.-

Soon enough, an hologram of the Kree Imperial appeared in front of the Protector.

-Hello, Kasius. Long time no see.- Noh-Varr greeted the other.

-Noh-Varr. You have a lot of courage to communicate with me after your failure with the 18th Kree Diplomatic Gestalt.-

-Are you really talking about failure, Kasius?-

-It was a suicide mission!- The other screamed. -I was cornered, outmanned and overrun. Two of my trusted generals dead at my feet, enemies closing in.-

-What option did I have?!- Enraged, Kasius looked at his servant and ordered her to activate the tractor beam, which started pulling Noh-Varr’s ship to his. -We will see each other really soon, Noh-Varr.- The blue-skinned Kree smirked, and cut the communication.

-Dammit.- Marvel Boy muttered, as he tried to fly away from the tractor beam’s range.

-What’s going on?- Kate asked, walking inside the cockpit.

-They’re pulling us in. There’s no escape now… Just don’t let them see you.- He looked at her, who nodded.

Once Noh-Varr’s ship was anchored to Kasius’, the young Kree opened the door and walked down, where the Kree Imperial and his second-in-command, Sinara, waited for him.

-It’s been so long since I physically saw one of… You.- Kasius exclaimed, approaching the pink-skinned Kree.

-Likewise.- Noh-Varr looked at the Imperial.

-What brings you to Earth’s orbit?- Kasius wondered, putting his arm around Marvel Boy’s neck. -I thought you were now part of a team of Terrans.- He spat out the last word with disdain.

-Just as interesting as yours.- The Protector smirked and Kasius let go of him immediately.

-I am just stating the truth, Kasius.- Marvel Boy shrugged. -From heir to the Empire to reject, yours is an interesting journey.-

Sinara started playing with her two silver orbs, which she could remotely control in the air.

Kree soldiers appeared from Noh-Varr’s sides, ready to attack them.

-So you got yourself an army?- He inquired.

-I guess you could say we are all rejects… Including you.- Kasius smiled evilly, as his soldiers started attacking Marvel Boy.

Eventually, the young Kree was overpowered and held against the ground. Sinara walked to him, ready to make her orbs penetrate forcefully into the Protector’s body.

Just as his second-in-command was about to kill the Protector, she was hit with an energy blast that came from Noh-Varr’s ship. Kate Bishop was standing in front of it, wielding a Kree Composite Soul Bow.

-Is it a Terran?- The Imperial wondered, marveled, and started to approach the Young Avenger.

-Stand back!- She exclaimed, ready to fire again.

-Such a beautiful specimen…- Kasius muttered.

Suddenly, he heard a gunshot behind him and saw Noh-Varr, standing again, who had destroyed his tractor beam.

-GET HIM!- He ordered, but his soldiers were easily defeated by Kate and Noh’s teamwork.

Displaying his superhuman agility, Marvel Boy leapt over both Kasius and Sinara and landed next to Kate. The pair pointed their weapons at the Kree.

-We will see you two again…- Kasius smiled, as Noh-Varr and Bishop got back inside the ship and flew away.

Kasius looked outside the window, where he could see planet Earth in its entirety. Then, he looked at Sinara, who had just walked up to him.

-Now I understand why both the Skrulls and the Empire have an interest in this planet. At first, it was only an attempt to regain my family’s respect, but now I must admit that being the ruler of such a beautiful planet sounds appealing.-

Sinara looked at the planet in front of her, unable to see what Kasius was talking about.

-I know you do not agree now.- He looked back at Earth. -But you will soon. I guarantee it.- 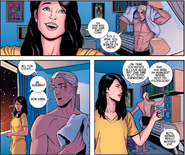 "How could anyone leave a world that makes things as wonderful as this?"

"At which point the Skrulls attack."

Noh-Varr shows Kate Bishop the way to the cockpit

Noh-Varr pulls out his Nega-Bands...

"Is it a Terran?"
Add a photo to this gallery

Retrieved from "https://marvelcomicsfanon.fandom.com/wiki/Hello_Cruel_World_(YA)?oldid=218580"
Community content is available under CC-BY-SA unless otherwise noted.