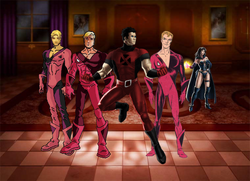 The Hellions were a team of teenaged mutants who were recruited by Selene and trained educationally and in the use of their powers at her private school at the Hellfire Club. They attacked the Xavier Institute twice, both times losing to the New Mutants, and both times losing a member to their foes. After losing both members, Selene replenished their ranks.

Retrieved from "https://marvelcomicsfanon.fandom.com/wiki/Hellions_(Earth-1010)?oldid=189640"
Community content is available under CC-BY-SA unless otherwise noted.