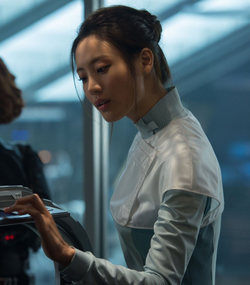 Doctor Helen Cho is a Korean geneticist, and an ally of the Avengers. She was present at Stark Tower when the group returned from a successful mission, and put her medical expertise cellular regeneration to use patching a wound sustained by Clint Barton during the their campaign. She then grudgingly accepted an invitation to the Avengers' victory party when she learned that Thor was going to be there.

Dr. Cho is a talented research scientist and physician with particular areas of expertise in in genetics and cellular regeneration.

Retrieved from "https://marvelcomicsfanon.fandom.com/wiki/Helen_Cho_(Earth-1010)?oldid=205012"
Community content is available under CC-BY-SA unless otherwise noted.