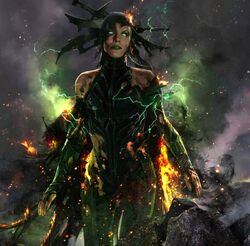 Queen of the Dead
Identity

Do me a favor and kill as many people as you can. Hell's been boring lately.

Hela is the oldest child born to King Bor of Asgard. She was sadistic and cruel, and the exact opposite of her younger brother, Odin. Eventually, her ambitions outgrew her family, and she was banished to Niffleheim, the Realm of the Dead.

Over time, Hela rose to power in Niffleheim and became the feared Goddess of Death all throughout the Nine Realms. Eventually, her attention was grabbed the Titan, Thanos, who had made more contributions to her Kingdom than anyone else. She approached him on a battlefield after the bloodshed was finished, and made her desire for him known.

Hela and Thanos quickly fell in love and began to hatch a plan to lay waste to the entire universe. Hela told Thanos about the Infinity Stones, which he quickly developed an obsession with. She began to doubt his commitment when he started adopting daughters from the planets they besieged, but soon came to appreciate his methods as he trained them to become assassins.

Eventually, Hela discovered that Odin had become the King of Asgard and raised sons of his own, including Thor, who vehemently opposed Hela and the Black Order, and Loki, who they successfully manipulated into working alongside them. Her rivalry with Thor has since led to her desiring to claim Asgard for herself, and she believes once they wield the Infinity Stones, they will be able to make that a reality.

[[Category: In a Relationship with Thanos Characters]]
Retrieved from "https://marvelcomicsfanon.fandom.com/wiki/Hela_Borsdottir_(Earth-101)?oldid=250200"
Community content is available under CC-BY-SA unless otherwise noted.