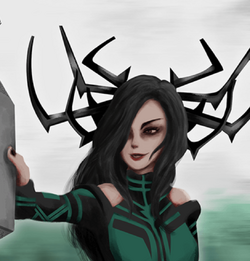 The Goddess of Death
Identity

Ah, the carnage, the chaos, it's such bliss! This truly is the greatest day of my miserable life.

From the moment she was born, it was clear that Hela possessed power greater than Odin had ever seen. As she grew older and it became clear she had a mastery over death, he banished her to Niffleheim, where she quickly rose to become the Queen of the Dead.

Her hatred for Odin was what motivated Malekith to recruit her into the Order of the World Tree. She was ecstatic to join in on the slaughtering of the masses of Earth, but when the dust settled she returned to her kingdom in Niffleheim to maintain the influx of souls she had received. However, she remains on call for Surtur, should he need any massacring across his kingdom.

Retrieved from "https://marvelcomicsfanon.fandom.com/wiki/Hela_(Earth-2001)?oldid=260939"
Community content is available under CC-BY-SA unless otherwise noted.