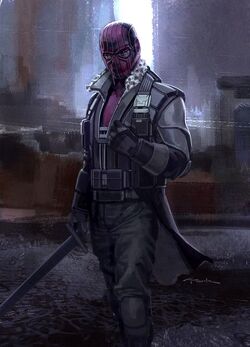 Baron Heinrich Zemo was a German nobleman before and during World War II, who once served the authoritarian terrorist-criminal-paramilitary organization of the Nazi Party known as Hydra, under the founding leadership of Johann Schmidt, the Red Skull, helping in exchange for the ultimate safety of his people from the hands of the foreign Allied Powers, whom he thought whose intentions were to invade his nation, instead of ending their threats along with the Axis Powers. Aside from being the twelfth Baron Zemo, he was also the husband of late German noblewoman, Hilda Zemo.

For the entirety of the second World War, Zemo had sincerely proven his allegiance for Hydra by working within the organization as one of its head, scientist supremes, create biological weapons that could kill thousands or even control them to their wills and serve them, and serums that could enhance both Hydra soldiers, before planning to introduce the latter to the Nazi Party as an ultimate advantage to fight against Abraham Erskine's famous Super-Soldier Serum that he used to help the Allied Powers, specifically, the United States Army, wherein his efforts would eventually create the first heroic super-soldier, Captain America

However, by the time their experiments were already reaching their peak outcome, Captain America's forces known as the Howling Commandos, had begun to target Zemo's forces after they've learned of their sinister schemes at Castle Zemo. Heinrich and the Captain then fought in hand-to-hand combat, with the penultimate outcome as Heinrich tricking the hero by making him fall into his trap using the gaseous weapon Formula X, while he continues to finish synthesizing his new attempt on the super-soldier serum with a modified sample of Rogers' blood and Schmidt's, later dubbing it the Serum X.

Despite Zemo's success in formulating the Serum X, Rogers was still able to figure out behind Zemo's reason of joining Hydra and the Nazi Party altogether, knowing that he was doing all of it for the sake of protecting his entire nation and his only family, his wife, from the attacks of the Allied Powers. With it, Rogers came to fully convince Zemo that both Hitler and Schmidt had deceived and manipulated him and twist his own beliefs by replacing it with their own diabolical ideologies after proving and showing Zemo the mostrosity and inhumanity that his allies had started since the beginning of the war.

Distraught and stricken by the cruel and extreme acts committed by the people he had been serving for a few years, Heinrich when the Red Skull himself, along with some of Hydra operatives, came to visit him in his laboratory to see the current progress of the Serum X. Out of the sudden, Heinrich drops the cradle containing all the finished serums as he pretended to give it to the general, much to Schmidt's shock and anger to reveal that Zemo has decided to turn against him and Hydra. Even before the Hydra leader could have fatally attacked the traitor, Heinrich releases Captain America from his restrains and helps him apprehend the Red Skull and try taking down Hydra.

The two pitted against Schmidt in a close fight, although it still ended in chaos and destruction, with Schmidt escaping Castle Zemo, but not before intentionally activating the protocol to release all his invented biological weapons contained inside weaponized missiles, within the lab out to directly aim its main designated targets, the city of Zeulniz (the modern-day of Leizpig), among other several cities within and beyond Germany.

As a desperate response, Zemo forces Rogers to leave the castle and chase after Schmidt by locking himself inside the castle's lab as he finds a way to prevent the launchings, to which he successfully did, but at the ultimate cost and risk of sacrificing all his work and career, and possibly even his life.

Nevertheless, Zemo chose to look at the bigger picture of saving the fate of his nation and the entire world, subsequently choosing to self-destruct all the missiles while they were still inside Castle Zemo, causing for the stronghold to blow up and its structure completely collapsing below the ground, leaving Zemo's fate unknown and presumably dead, much to Rogers' despair to see his new ally go, with him and the S.S.R. eventually honoring Zemo for his noble sacrifice. According to the words of General Chester Phillips, Hydra would still have recovered during the last days of the war if it wasn't for Zemo's change of heart.

Despite what everyone else had thought, Zemo was later revealed to have barely survived the events that ended Hydra and the Nazis during World War II, wherein he actually decided to faked his own death after being found by his wife, all so he could start a new life with his wife, after the two set up a low profile living in the small towns in Germany. Heinrich lived for years as a peaceful man, having started a family with Hilda by having a son named Helmut in the late 70s, and his son having started a family of his own in the decades that came to follow on.

Despite his lasting peaceful retirement within his hometown for a few decades, it eventually came to a tragic end years later, days after the modern day's Chitauri Invasion. When a small fleet of extraterrestrial forces known as the Chitauri somehow "escaped" the battle and flew all the way from New York, in which chaos and destruction was suddenly unleashed by the strangely-mindless beasts upon their town and some parts of the city Leizpig. Heinrich along with his grandson and daughter-in-law were unfortunately killed, along with a hundreds more casualties, by the siege that would followed. His son Helmut, who had helped to defend his nation from the attack, would find their bodies underneath rubble that took a few days to sort through.

A Legacy to Avenge

Though the mastermind Loki was defeated and the entire Chitauri fleet being decimated by the Avengers and the Defenders days earlier, Helmut Zemo angrily blamed them for causing his family's death and vowed to destroy the team at all costs necessary. The imbroglio even worsens when his son Helmut secretly found out that the terrorist Hydra was the one responsible for modifying and subsequently releasing the small fleet after discovering their survival before and during Hydra Uprising. As a plan of his to avenge the deaths of his family and people, Zemo had set about his plan to tear apart S.H.I.E.L.D. (his father's situational allies) and Hydra (the responsible party for unleashing the Chitauri on his hometown) by joining both sides, just so he could steal and extract all the organization's data and information, which subsequently started the Hydra Uprising and its alleged downfall that also started the Nimrod Invasion, an event during the march to Ultimate War. This eventually led for the government to start the Superhuman Registration Act, which started the Superhuman Civil War.

Decelerated Aging (formerly): Thanks to his special Compound X, Zemo's aging has been slowed by a significant amount, bordering on immortality. This has allowed him to retain his youthful vigor, vitality, and appearance well into his old chronological age. However, after giving birth to his son, Heinrich decided to extract the remaining traces of the longevity serum in his body, deciding to continue his body to age normally to live a traditional yet contended life with his family.

Retrieved from "https://marvelcomicsfanon.fandom.com/wiki/Heinrich_Zemo_(Earth-61615)?oldid=267292"
Community content is available under CC-BY-SA unless otherwise noted.