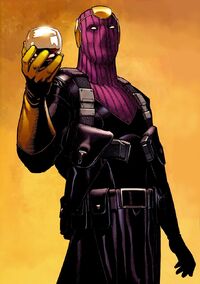 Shortly before the death of Johann Schmidt AKA the Red Skull by the hands of Captain American in 1945. Johann had a lover and had also gotten her pregnant, 8 months later and before she could tell Johann of the pregnancy he was killed by Captain America, she belonged to the Zemo family and therefor Johann's child would be inducted into a rich and powerful family. After Heinrich was born, he inherited the Super Soldier genetics from his father Johann thus making him biologically advanced compared to ordinary humans.

During his childhood, Heinrich was brainwashed into believing his father was a hero and was murdered in cold blood by Captain America, eventually leading Heinrich to grow up and hate Americans. In 2012, Heinrich discovered that Captain America was alive and had been revived by S.H.I.E.L.D. In hopes of personal vengeance and honoring his hero father, he set off on a quest to kill Captain America.

In his prime Baron Zemo possessed the normal human strength of a man of his age, height, and build who engaged in Intensive regular exercise. His Super Soldier serum enabled him to retain his strength and physical vitality into his old age.

Retrieved from "https://marvelcomicsfanon.fandom.com/wiki/Heinrich_Zemo_(Earth-1315)?oldid=199894"
Community content is available under CC-BY-SA unless otherwise noted.