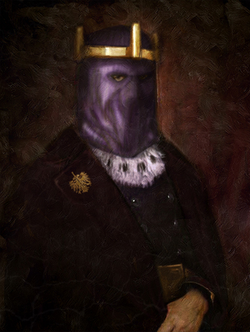 The twelfth Baron Zemo, Heinrich Zemo was fascinated when he was told the legacy of his family by his father, and of the connection Harbin Zemo and Heller Zemo had with the Sleeper. Heinrich was by far the most arrogant of the Barons, claiming that he was the greatest of them and that it would be he who would awaken the Sleeper. He mused in his journals, chronicling the quest the Zemo Bloodline had long taken, about the Sleeper's origins as possibly hailing from aliens or gods, as well as thinking that "Emperor Zemo" had a nice ring to it.

During this period, Zemo was contacted by a man named Johann Schmidt calling himself the Red Skull. While Heinrich confessed that it was an overly theatrical title, the Baron decided he would meet with him. The two held their discussion in the ballroom of Castle Zemo, though the Baron was disappointing to find that the greatness was lost on Schmidt. He noted that the Red Skull had a single-minded drive for the acquisition of power, and agreed to further meetings, believing an alliance would be mutually beneficial. Over time, the Baron came to admire the way Skull manipulated the political trouble in Berlin to create an army loyal to him: Hydra, and he agreed to let the Skull post troops in the Castle as they worked.

Zemo gained a dislike for Arnim Zola during his partnership with the Red Skull believing that while he was certainly a genius, it didn't make up for his odious personality and he considered the German scientist reckless over ambitious. Zola's work in Castle Zemo made Heinrich nervous, and he eventually confronted the scientist over the danger his work served to both his home, and the treasure contained within. Baron Zemo took his complaints to Red Skull, who forced Zola to back down and restricted him to work only on research. When they arrived, Zola found he was disgusted by Baron Wolfgang von Strucker, who he thought was pitiful for wearing the title Baron yet allowing himself to be ordered around by the Red Skull and Zola "like a common domestic".

With his research suspended, Zola entered the Zemo Family library and indulged himself in the history of the Zola bloodline, initially something Heinrich approved of, believing Arnim would learn some real character from it. Whatever Arnim Zola discovered in the libraries, he soon brought to the Skull, and the two began to constantly seek for Heinrich to share more of his family history with them. In short order, this increased interest warmed Zemo up to the two again, and he consented to allowing Zola to begin experimenting in the Castle again, under his supervision. Arnim Zola claimed that he was willing to help him improve Adhesive X, a pet project of Zemo's and a powerful bonding agent, but when they performed an experiment on it, Zola rigged it to cause an accident meant to kill Zemo. Against all odds, the Baron survived the accident, though not without scarring and near-fatal damage. Like his new allies, Zemo continued to pretend it was an accident, while he slowly began to plot his revenge.

Unfortunately for the Baron, during the time he recovered the Red Skull went about destroying the soldiers that had remained loyal to him, and converting the weaker minded ones to his own cause. He found himself a stranger in his own home, and was dismayed to admit the balance of power had shifted, and HYDRA was in control now. It became clear to Heinrich that the Red Skull knew of the Sleeper all along, and he was only still alive to give him information. He decided that if he was to die, he would do so like a true Zemo, and prepared to take vengeance to defend his home and the treasures guarded by his family for generations. He watched on in rage as HYDRA fully occupied the castle, and began to shape it in their own image, but he remained the illusion of being invalid, waiting for his chance.

His diaries would be discovered over time by Captain America while searching through the castle, allowing him to put together the pieces of the underlying mysteries of Castle Zemo. After putting it all together, Rogers speculated that Zemo could have been a useful ally if they had met under different circumstances.

Retrieved from "https://marvelcomicsfanon.fandom.com/wiki/Heinrich_Zemo_(Earth-1010)?oldid=190649"
Community content is available under CC-BY-SA unless otherwise noted.