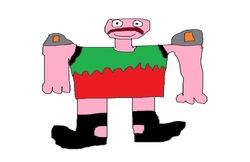 -- Heinrich Causa after receiving his powers

Heinrich Causa was born in Sweden, when he grew-up, he married a woman named Bella and they had a daughter called Tracey, soon after, both Tracey and Bella where murdered he was then kidnapped by Demons and his blood was infused with lava, he then became a vigilante named Blood Appetit

War Of The Realms

while earth was at war with asgard due to it's new king Heinrich was put in charge of an army after all his work, he was awarded a Medal Of Honour but this didn't last this long as he was killed by asgardian soldiers

He was ressurected by the same demons that gave him his powers, he would then still operate as a superhero and then he would go on to fight Bluekill he got mortally wounded which eventually gave him amnesia

he was put in a hospital and given medical treatment, he then began a life of crime after being healed from injuries but not his amnesia and attacked his own team and other teams, he committed thousands of crimes but eventually the demons were able to remind him who he was

he eventually left the Worldvengers after a long time, he went to get revenge on the celestial, Bluekill who offered to bring his family back to life in exchange for Heinrich to be evil, he agreed to the offer, Bluekill then completely brainwashed Heinrich so he was completely evil and took over the galaxy, his former teammates, Growcage and Warstone were leading a mission to turn him good again, however, since Bluekill was controlling Heinrich, there, Warstone soon saved Heinrich from Bluekill's control, Bluekill remained alive though he was sucked into Underspace, Jennifer and Heinrich married, while, Growcage went back to Jomarinoa.

while Heinrich and Jennifer left the Worldvengers, they remained honorary members.

Retrieved from "https://marvelcomicsfanon.fandom.com/wiki/Heinrich_Causa_(Earth-616)?oldid=262160"
Community content is available under CC-BY-SA unless otherwise noted.