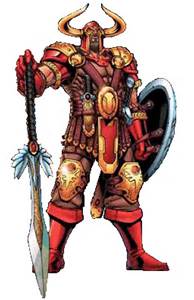 Heimdall the Faithful, the Immovable, the Eternal Vigilant, the All-seeing, the All-hearing, the All-Seer
Identity

Single
Occupation
Sentry, Guardian of Bifrost
Origin
Origin
Heimdall is one of the Asgardians once worshiped as a deity by the Vikings and Germans.
Place of Birth
Asgard
Creators

Little is known about Heimdall's life before the Masters of Evil's attack on Asgard. It can be assumed to be similar to his mainstream counterpart.

Heimdall, Balder, and Tyr were imprisoned during the Masters of Evil's attack on Asgard. Balder was guarded by the Shocker and the Rhino, until he was freed by the Ultimate Alliance.

Heimdall's senses, as extraordinarily acute as they are, can be blocked by certain magical spells. Also, just as any other being with superhuman senses, his senses can be taken advantage of if he hasn't toned them down enough.

Equipment: None known.
Transportation: His steed Gulltopp
Weapons: He carries the Gjallerhorn, used to signal when he sees any impending attacks on Asgard.

Retrieved from "https://marvelcomicsfanon.fandom.com/wiki/Heimdall_(Earth-6109.2)?oldid=131396"
Community content is available under CC-BY-SA unless otherwise noted.