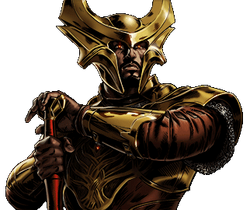 Heimdall is an Asgardian blessed with sensory capabilities far beyond those of other Asgardians, and these senses have been put to use placing Heimdall in the role of gatekeeper to Asgard at his observatory on the Bifrost Bridge. Despite his phenomenal ability however, Heimdall was unable to perceive an intrusion by several jotuns when they stole into the vaults of Odin. This same intrusion also sparked the ire of Odin's son Thor, who came to Heimdall, with several of his friends, seeking access to Jotunheim. Although Heimdall agreed to let them pass and accepted their request that he keep their movements secret, his loyalty to Odin was stronger and he immediately reported their departure. Odin's reaction was swift and had Heimdall opening the Bifrost twice more in quick succession to allow Odin to retrieve his people.

Later, with Thor banished and Odin fallen into his Odinsleep, Loki placed himself on the throne as regent and demanded Heimdall's loyalty. Although he grudgingly accepted, Heimdall opted to only observe a literal interpretation of his vow to Loki and did not interfere when Sif and the Warriors Three used the Bifrost to reach Thor. Enraged, Loki dismissed Heimdall as a subject, thus releasing the protector of the Bifrost from his vow. Heimdall responded with an immediate attack, but Loki simply froze him in a block of ice before the blow could strike.

Heimdall was still frozen when Loki brought several jotuns through the Bifrost. Locked in his icy prison, he was helpless to prevent Loki leading one of them into the city, but he was soon galvanised by the calls of Thor who was still trapped on Earth. Smashing free, he quickly cut down two jotuns who had been left to guard, and opened the Bifrost for Thor and his friends. Severely weakened, Heimdall could assist the adventurers no further and had to be carried from his observatory.

He returned following the destruction of the observatory and when Thor asked if passage to Earth was lost, he replied, "No. There is always hope."

The Bifrost was eventually rebuilt and Heimdall reclaimed his role as its guardian. In that capacity he had a heavy workload as the Nine Realms had been plunged into chaos and disorder during the bridge's period of ruin, and Heimdall was kept busy with the frequent transportation of Asgardians and prisoners once it was restored.

He also saw the Convergence coming, and spoke of it to Thor as well as pointing out that Jane Foster was also studying the phenomenon on Earth, though she did not understand what it was. During his talk, Heimdall became puzzled that he could no longer see Foster, and permitted Thor an exit from Asgard to check on her.

The danger that had hidden her from his sight was not immediately clear to Heimdall, but within days he had his first encounter with it. The dark elf Malekith came to claim the Aether, that as a parasite had taken Foster for a host. Heimdall could hear the alien craft that flew close to his observatory, but could not see it. Leaving his sword behind, he ran up a bridge suspension and leapt upon the ship, ramming two long daggers into it. Tearing his way down its hull he damaged it so that it crashed, but then he found himself facing an even mightier warship disgorging a fleet of the assault craft of the type he had just vanquished.

The assault was turned back by the efforts of Thor and the other Asgardians, and afterwards Odin decreed that none could enter or leave Asgard. Heimdall, sceptical of his ability to guard against attackers he could not see, confided his misgivings to Thor who told him he needed to remove Jane Foster from Asgard. Heimdall was duty-bound to refuse the use of the Bifrost, but allowed himself to be complicit in Thor's plan by summoning Odin to his observatory on a matter of urgency. He announced to Odin that treason had been committed, and when asked whose treason, he simply said, "Mine," and surrendered his sword.

Heimdall was the first Asgardian to come face to face with Ragnarok, and perished when he threw him off the Bifrost.

Heimdall possesses the strength of an Asgardian male who engages in intensive regular exercise.

Heimdall is duty-bound to protect Asgard and its ruler, and does so even under circumstances that go against his better judgement, though he can, and will, abuse technical loop-holes in dire circumstances.

Retrieved from "https://marvelcomicsfanon.fandom.com/wiki/Heimdall_(Earth-1010)?oldid=100016"
Community content is available under CC-BY-SA unless otherwise noted.