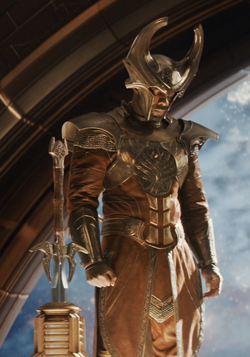 The All-Seeing One
Identity

Earth-101
Base Of Operations
The Bifrost Citadel
Characteristics
Gender

Heimdall is the all-seeing, all-hearing Asgardian watcher of the Bifrost Citadel. While he was sworn to sacred duty under King Odin, he would often assist Prince Thor in escaping his rules to go on clandestine missions.

He went on to assist Thor and the Avengers by keeping them updated with the happenings of outer space so that they could prevent the Prophecy of Infinity from coming true. However, he was unable to see the arrival of the cast out Serpent, Odin's brother. His wrath led to the destruction of Asgard, forcing the Asgardians to relocate to Earth through the Bifrost.

Heimdall formed an alliance with the Midgardian vigilante, Daredevil, to train him how to operate the Bifrost. Before he could finish training him however, he ended up sacrificing his life in the battle against the Serpent to save the life of the Hulk.

Retrieved from "https://marvelcomicsfanon.fandom.com/wiki/Heimdall_(Earth-101)?oldid=250199"
Community content is available under CC-BY-SA unless otherwise noted.