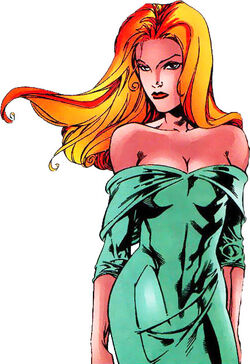 Heather grew up as a neighbor to the Twoyoungmen family. Michael Twoyoungmen's daughter Elizabeth was like a sister to Heather and moved in with the McNeils after her mother died and Michael went in retreat, eventually becoming the mystical hero Shaman.

Because Heather's parents had seven children of their own to support as well as Elizabeth, Heather took a job as a secretary when she was just 17 in order to help support the family. Heather was working as a secretary to Jerome Jaxon of the Am-Can petroleum company when she met James Hudson, one of the company's research scientists. Hudson had invented a cybernetic suit for geological exploration. Heather learned Hudson had resigned from the company after learning his suit was to be sold as a weapon by Jaxon, and stole its cybernetic helmet, rendering it inoperable. Heather too resigned, and followed him. The two were attracted to each other instantly. Heather also explained that the Canadian government could help them, and they approached Department H, with a view to starting a superhero team, using Hudson's suit. The team came to be known as Alpha Flight, and Hudson became its leader.

Heather is an excellent combatant.

Retrieved from "https://marvelcomicsfanon.fandom.com/wiki/Heather_McNeil_(Earth-1010)?oldid=114899"
Community content is available under CC-BY-SA unless otherwise noted.