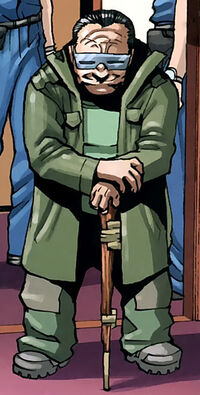 Little is known of Elder's life before the Mole Man Invasion or why he dwelled in Subterranea or how discovered the Moloids.

For years Harvey Elder had been angry at society for being judgmental and prejudiced against those who looked different, and believed he'd rather be feared than respected. He spent all of his years in Subterranea developing a master plan on taking over and being the ruler of New York. Harvey created a large Moloid that was the length of a skyscraper.

Finally in 2013, Mole Man put his plan to work and crashed through a street in Midtown riding his giant Moloid, at first it seemed his plan would work until four superpowered individuals put a stop to his attempted invasion of Manhattan, a rock-like monster killed his Giant Moloid and a flying man covered in fire scorched all of his remaining Moloids to death.

Defeated, Mole Man was taken into custody by the four individuals, sent to and then incarcerated at a secret military base.

Radar Sense: The Mole Man possesses heightened senses that have developed naturally to compensate for his poor vision. Primary among these is his "Radar Sense", which may be similar to Daredevil's, although it is not as acute. The Mole Man's brain has several regions which are able to consciously sense that portion of the electromagnetic spectrum that his brain constantly generates. The signals emanate from the "sending regions", bounce off objects around him, and return to the "receiving regions" of both hemispheres. In this way, he synthesizes a very close analogue of third-dimensional human sight, which supplements his own weak natural vision. Indeed, the combination of the Mole Man's sight and his radar sense makes his awareness of what is around him somewhat superior to the average human's. He can use his radar sense to detect the presence of objects behind him, or in total blackness.

Super-Genius Intelligence: The Mole Man is a scientific genius, who has mastered the principles underlying the Deviant technology that he discovered in Subterranea and has even made radical improvements upon much of it.

Fighting Skill: The Mole Man has developed a means of fighting with using his staffs that resembles the martial art of kendo .

Abnormal Sensitivity (Light): Although the Mole Man has adequate vision in dark places, he is blinded by normal light.

Equipment: Visor: The Mole Man wears a protective visor that reduces the intensity of normal lighting to comfortable levels.
Transportation: None known.
Weapons: Staves: His stave appears to be an aid to the visually impaired Elder. However, he is quite skilled in their use as a weapon. On occasion, he has used a stave that launches a concussive blast.

Retrieved from "https://marvelcomicsfanon.fandom.com/wiki/Harvey_Elder_(Earth-1111)?oldid=189276"
Community content is available under CC-BY-SA unless otherwise noted.