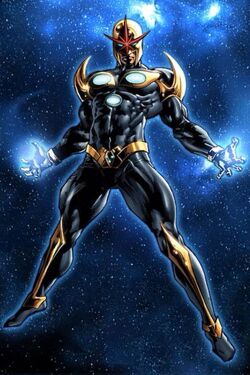 You've always told me to run away while you risk your life protecting the city. This time, I'm not running away because it's my city too, Pete. If you're gonna fight these baddies, then I'm damn well gonna do the same thing!

Jason Hadrian Virgil Osborne was born to industrialist Norman Osborne and his wife, Martha. Jason or by his childhood name: Harry, lived a privileged life, having everything being served to him in a silver platter but in reality he was very lonely. This was due to his father's negligence towards him after the death of his mother, spending most of his time working than giving most of his attention to him. This left a bitter taste in Harry's mouth and he would spend most of his time in books due to his love for literature and fiction, his passion for becoming a novelist. Harry eventually meets Peter Parker during middle school, becoming fast friends.

By the time he had reached high school, Harry became very close to Peter due to his lack of friends and would often protect him from Frederick Thompson and Kong McFarlane before Uncle Ben starts accompanying him to keep the bullies from picking on him. Later on, Peter ends up getting bitten by the radioactive spider, giving him his powers which led to his popularity and he would ignore Harry for the popular crowd, causing a wedge within him and Peter. However, after Aunt May was murdered, Harry reconciled with Peter. Soon after, Peter started off his career as the vigilante, Spider-Man while his father fell victim to the botched OZ serum project, turning him to the Green Goblin. After Spider-Man revealed Harry that his father was the Green Goblin, leading to webslinger revealing his identity and his father's arrest by S.H.I.E.L.D. led by Nick Fury, Harry ended up staying with relatives on his mother's side until he graduated high school and started college at Empire State University with Peter and Kong.

After Peter became part of the Avengers, jealousy began to consume Harry as he watches him fight all of the superpowered villains and once tried to fend one himself, only for him to get himself into trouble and be saved by the webslinger who told him what he had did was dangerous. Harry tells Peter that he didn't want to keep running away while the latter takes on the foes despite having the Avengers by his side. Peter continued to object the idea of Harry fighting and tells him to stay out of his battles.

However, days later, Harry encounters a mortally wounded Nova Corps member who had crash-landed on Earth. In his dying breath, he gives Harry his helmet, telling him to channel the Nova Force. Just as Harry takes the helmet, he was encountered by Annihilus. After evading his attacks, Harry decided to take the fallen Nova Corps' words and puts on the helmet, taking possession of the Nova Force, transforming him into Nova. Shock overcame Harry for a brief moment, but soon he began to feel the adrenaline as he used his new powers to fight off Annihilus before the villain retreated. After his first fight, Harry began his own career as Nova, taking on criminals as Spider-Man has and even began to take on different villains.

As Spider-Man discovers Harry fighting as Nova, he confronted Harry about it and tells him that he's putting himself in danger. Harry refused to back down and calmly reasons with him, telling him that he didn't want to run away because he cares about the city as much as the webslinger does and was able to prove it to him by saving him when he was fighting the tougher villains.

However, this caught the attention of the Nova Corps and agreed in having Harry become part of the intergalactic force, taking him to Xandar where he was put under training in mastering the Nova Force followed by hand-to-hand combat. After spending at least 2 months in Xandar, Harry officially becomes part of the Nova Corps and even gained Xandarian citizenship prior to his return to Earth, rejoining Peter and occasionally fights along with the Avengers.

Retrieved from "https://marvelcomicsfanon.fandom.com/wiki/Harry_Osborne_(Earth-7090)?oldid=267832"
Community content is available under CC-BY-SA unless otherwise noted.