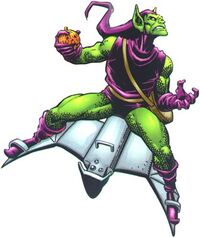 The Man With the Yellow Eyes
Identity

No Hair, formerly reddish brown
Unusual Features
*As a result of the performance-enhancers mutating, Harry, hair gradually disappeared and his eyes turned to a dark shade of green.
Status
Citizenship

-- Harry Osborn, seconds before his death

Harry Osborn was born to wealthy industrialist Norman Osborn. Norman's wife, however, died giving birth to their son, leaving Norman to take care of Harry alone. Over the next several years, Harry gradually became one of the smarter kids to attend Midtown High, and eventually became best friends with Peter Parker and Mary Jane Watson. Eventually, however, Harry would be pulled into a deep depression when Norman lost his battle with lung cancer as a result of his smoking addiction.

Sometime after Norman's death, Harry took over as CEO of his father's company, and eventually married his college sweetheart Emily Montreal. The two would eventually have a child together named Normie. Harry eventually set Oscorp on the map in a way that his father never could, securing a military contract and funding his new weapons. Harry then became an instant celebrity. He also attended Peter and Mary Jane's wedding, paying for most of everything as a way of repaying his friends for the kindness they had shown him as children.

Around this time, Emily would become diagnosed with cancer. Not wishing to have Normie grow up without both of his parents like he had to go through, Harry looked extensively for someone to help find a cure, but it was no use. Emily was gone before Harry could find a cure. Harry, like his father before him, raised his son to the best of his ability, but eventually, Harry became addicted to several types of drugs, leading to more mishaps. Eventually, Harry became so depressed that he left the country, taking his son with him and leaving his butler, Bernard, in charge of Oscorp for the time being.

Return to the United States

After spending years in rehab in Europe, Harry decided that this was the right time to return to the U.S. Boarding a plane, Harry and Normie returned home. Deciding to reunite with the only family he had left, the Parkers, Harry visited Mary Jane in her home in Forest Hills. Harry also met her nephew, Tim, and her own children, May and Ben. Unbeknownst to Harry and the rest of the Parkers, however, Tim was secretly the masked vigilante known as Spider-Man. During dinner, a discussion about super heroes erupted, with Spider-Man being the prime subject, causing Harry to develop an interest towards super powers.

At Oscorp, Harry was attempting to perfect a special performance-enhancing drug that could grant someone peak strength, speed, agility, reflexes, and intelligence. However, in the midst of testing, the serum turned green and exploded, destroying much of the facility that Harry was working in. Afterwards, Harry awoke in the hospital. He then found that the serum had worked. He was stronger, smarter, faster, and more intelligent than before. However, this began to cost Harry his sanity, and he gradually began to become sadistic.

When the explosion at Oscorp became news, the board of directors decided that it would be best that the company be sold to it's rival, Quest Aerospace, due to its notorious reputation of disastrous experiments. Harry was infuriated by this decision, and vowed revenge for the people who destroyed him.

Harry eventually robbed a costume shop, taking with him a costume of a green elf with purple shoes, gloves, a hat, and a vest. Harry outfitted this costume with a variety of weaponized gadgets and implanted kevlar armor plating underneath the costume to ensure security. With his new gear, Harry set out as the Green Goblin and began to attack Quest Aerospace facilities all over the city, first attacking a military battlesuit test, then attacking the testing of an experimental railgun prototype. ===Offering a Chance and Death===

Harry Osborn possesses no super powers of his own. However, he can go toe to toe against Captain America and possibly win.

Harry is able to lift 10 tons under his own Goblin powers.

Retrieved from "https://marvelcomicsfanon.fandom.com/wiki/Harry_Osborn_(Earth-38723)?oldid=189271"
Community content is available under CC-BY-SA unless otherwise noted.