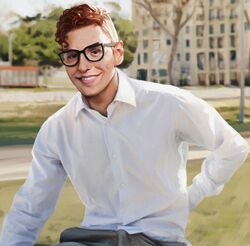 You've been leading the world into a safer future, Peter. Together, we can usher in a scientific paradise unlike anything the world's ever seen!

The first and only son of megalomaniacal businessman Norman Osborn, Harry was never going to live up to his father's expectations. He was never as smart or successful as Norman wanted him to be, which led to the two of them resenting each other. Eventually, Harry became best friends with Peter Parker, the smartest kid at Midtown, who agreed to tutor him. Norman only took this to mean that whatever success Harry might have would really belong to Peter.

However, Harry still had extensive knowledge about several experiments being developed at Oscorp. He had done reading about Richard Parker's genetically altered spiders, and deduced that Spider-Man could only be Peter Parker, as no one else would survive a bite from one of the spiders. Harry confronted his friend with this information and became the first person to ever learn Spider-Man's secret identity. From there, Harry agreed to become Spider-Man's "Guy in the Chair", who would assist him on missions through communicators and provide him with cutting edge technology "liberated" from Oscorp.

Harry and Peter went on to attend Empire State University, where they befriended their old tormentor, Flash Thompson, as well as two girls named Gwen Stacy and Mary Jane Watson. Harry and Mary Jane proceeded to go on several dates, and Harry began to fall for her, despite her not feeling the same way.

He was saved and has since become an outspoken critic of Oscorp and the evil wrongdoings going on behind the closed doors of the company. After the Green Goblin was killed in a confrontation with the Avengers, Harry inherited ownership of the company. Initially, he wanted to tear down the entire company, but was convinced by Peter to try and lead it into a new direction. He agreed, and began working extensively with S.H.I.E.L.D. and the public to redeem the company. However, the work proved to be overwhelming, as he still wanted to focus on his studies, and he turned the company over to Peter. Peter then opted to return the appropriated Stark Industries resources back over to Tony Stark, who offered to keep Harry on as a shareholder and consultant of the company, which he agreed to.

Retrieved from "https://marvelcomicsfanon.fandom.com/wiki/Harrison_Osborn_(Earth-101)?oldid=250670"
Community content is available under CC-BY-SA unless otherwise noted.