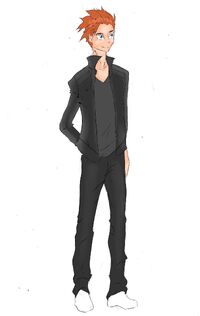 Harry Osborn is a rich kid who is the son of industrialist Norman Osborn who was mostly neglected by Osborn after the death of his mother and would spend more time at his job than being with him. Harry is also Peter Parker's best friend at Midtown High School, along with Gwen Stacy; as such, he was a secondary target for Flash Thompson's bullying. He's also be in a relationship with Liz Allen.

Harry would later grow jealous of Peter's relationship with his father as Norman admired Peter's intelligence and work ethic. However, Harry eventually manages to somewhat mend the relationship he has with his father. Later on, Peter becomes the vigilante Spider-Man and Norman becomes the host of the menacing Green Goblin, but Harry remains unaware that the two are his best friend and his father.

That of an ordinary Human who engages in moderate regular exercises.

Retrieved from "https://marvelcomicsfanon.fandom.com/wiki/Harold_Osborn_(Earth-981)?oldid=265735"
Community content is available under CC-BY-SA unless otherwise noted.