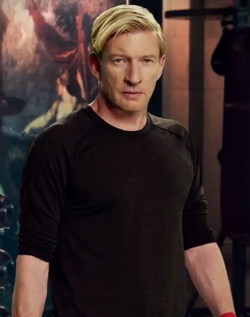 As a young man, Harold Meachum met and decided to build a business with his friend Wendell Rand. The business they ended up creating was Rand Enterprises for which they built the headquarters within New York City. However Meachum forever felt a sense of hatred and resentment towards his friend, as the day they first stepped onto the roof of their new building, Meachum felt a desire to push his friend off the roof and kill him, although he did not. Meachum continued working with Rand at the business, as the pair of them had children, as Meachum having kids named Ward and Joy while Rand had a son named Danny, who they groomed to take over the company some day in the future.

Deal with the Hand

Meachum was diagnosed with terminal cancer and faced the fear of death. During his treatment which was not helping him, Meachum was approached by Madame Gao who claimed she had a way of curing his death. Meachum agreed and also requested that Gao assist him in killing his business partner, so she arranged a plane crash which killed Wendell and Heather Rand while their son Danny Rand disappeared in the mountains. Meachum continued suffering with his illness, being cared for by Ward and Joy Meachum who would turn him over in bed to stop him getting bed sores, however eventually he died from the cancer. Only a few days later, Meachum rose from the dead as Gao had promised and the Hand began forcing him to live in hiding, controlling Rand Enterprises for the Hand's benefit through his son Ward who was the only one to know of his survival.

Resurrection: Harold's contract with the Hand has granted him a form of life-after-death which has the effect of raising him from the dead within days of having died. The mortal injuries disease that claimed his life on at least two occasions were seemingly erased with each resurrection, and only decapitation or incineration were believed to be able to kill him permanently. Each time he came back his psychosis deepened a little further however, and he exhibited increasingly aggressive outbursts.

Retrieved from "https://marvelcomicsfanon.fandom.com/wiki/Harold_Meachum_(Earth-1010)?oldid=190090"
Community content is available under CC-BY-SA unless otherwise noted.