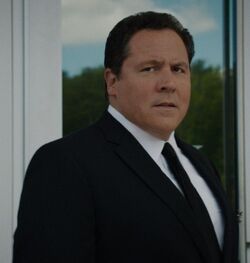 Harold "Happy" Hogan is a long-time friend of entrepreneur Tony Stark. For many years Stark employed him as his personal bodyguard and chauffeur.

During the Monaco Grand Prix, Happy risked his life trying to get the Mark V suitcase armor to Tony Stark as Stark was being attacked by Ivan Vanko on the race course. He later accompanied Natasha Romanoff on her attempt to stop Vanko from his attack on the Stark Expo. Despite her demand that Happy remain a safe distance, he insisted on lending further aid and was able to battle one security guard to a standstill while Romanoff took care of the rest deeper in.

Happy eventually became uncomfortable with his role as the "bodyguard of Tony Stark, the Iron Man," and was granted a new position as the head of security in the management complex of Stark Industries. It was in this capacity that he encountered Eric Savin, and Savin's boss Aldrich Killian when they visited Stark Industries. Immediately suspicious, he investigated them and later followed Savin to an exchange with another man. He tried to interfere and gather evidence when he noticed some of the man's flesh glowing in an amber hue, but Savin blocked him. Their altercation was interrupted when the other man exploded, killing several people and severely injuring Happy. Happy was able to point to a vital piece of evidence before he lapsed into unconsciousness, an act that gave Tony Stark a valuable clue into cause of the explosion.

Happy was put in a coma for some days, which prompted Stark to publicly threaten the Mandarin, responsible for the attack. Happy ultimately woke up, days after the explosion.

Harold Hogan is experienced at boxing, and is also a very skilled driver.

Harold Hogan possesses the strength of a man who engages in regular exercise while boxing.

Retrieved from "https://marvelcomicsfanon.fandom.com/wiki/Harold_Hogan_(Earth-1010)?oldid=137123"
Community content is available under CC-BY-SA unless otherwise noted.