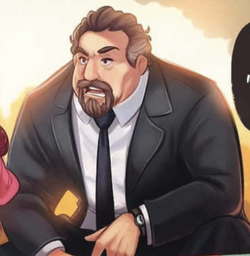 Do not challenge me to a Cheeseburger eating contest, Tony Stark, I swear to God I will beat you every time.

Harold “Happy” Hogan is a former marine, who was honorably discharged after suffering from a knee injury. He later got a job at Stark Industries as Tony Stark’s personal body guard and driver, thanks to a recommendation from his brother, Bruce.

Even after Bruce went insane and became the Melter, Happy stood by Tony’s side and, over the years, the two have become very close friends. Happy has even gotten close with Tony’s other associates Vicki Potts and James Rhodes.

When Tony turned control of Stark Industries to Vicki, Happy was promoted to the Head of Security, but that didn’t last long as the company was soon bought out by Norman Osborn. Happy quit out of loyalty, and decided to stick by Tony and the other Avengers while they attempted to prevent the Prophecy of Infinity.

Eventually, control of Oscorp would be handed over to Peter Parker, who redistributed Stark Industries’s assets back into Tony’s hands. Happy was then reinstated and even outfitted with a repulser glove.

Retrieved from "https://marvelcomicsfanon.fandom.com/wiki/Harold_Hogan_(Earth-101)?oldid=250665"
Community content is available under CC-BY-SA unless otherwise noted.