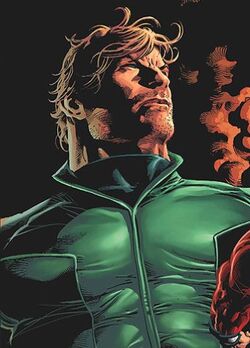 Earth-61712
Base Of Operations
Mostly mobile within the Canadian borders, sometimes based throughout Squadron City
Characteristics
Gender

Hey, hey! Look out ya' ... It's me, your hot, humble, harmonious Canadian superhero: Haywire! God, I'm starting to run out of H-words...

Harold Tremblay "Harry" Danforth was passionately loyal to his nation, the Republic of Canada, joining the Armed Forces of the Canadian Republic at the age of 15. Growing up in the military in the field of espionage, the outstanding skills that he gained mostly in using grappling hooks and wall-climbing, he was eventually dubbed by his comrades and superiors as the Haywire. Danforth would eventually be contacted and convinced by the American vigilante Nighthawk in secret to join their ranks within the Squadron Supreme to overthrow his own nation's superhero team, the publicly-praised Alpha Flight, whom Nighthawk had discovered were secretly a group of morally-corrupted, selfish super-powered maniacs with very little training as superheroes, legally-sanctioned under the jurisdiction of Department H. Initially conflicted on which side to choose due to his life-long loyalty to Canada, Haywire eventually infiltrated the Alpha Flight along with several other Squadron members and a group of Canadian hacktivist as the Keeners, and boded his time to help the heroes, believing that it was the right thing to do in order to end the clandestine corruption his nation has always suffered since it fell under the hands of a regime oligarchy.

In the aftermath of the successful First Modern Canadian Revolt, Danforth and the Keeners were graciously honored by the former soldier turned newly-elected President of the Canadian Republic, Major Bob Dobalina, who also partook in helping Danforth & the Keeners, and the Squadron Supreme take down the Alpha Flight and tyrant oligarchs who supervised them in the first place. Weeks have passed, Harold was eventually handed over the position of the head of Department H by Dobalina himself, knowing that he'll be able to rebuild the once-corrupted program with all his might, intellect, and moral compass. After being recruited by the Squadron Supreme officially for the very first time as their tech support and spy member, Haywire became romantically involved with fellow new recruit Edith Freiberg, the former mercenary turned redeemed superhero known as Inertia.

Retrieved from "https://marvelcomicsfanon.fandom.com/wiki/Harold_Danforth_(Earth-61712)?oldid=264302"
Community content is available under CC-BY-SA unless otherwise noted.