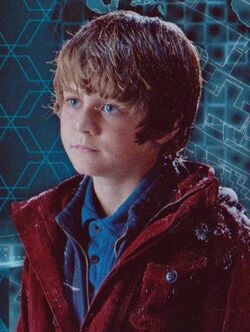 Harley Keener became aware of an intruder in his garage one night and, armed with a potato gun, accosted the man. The intruder turned out to be Tony Stark, and the unexpected arrival was made even more impressive by the presence of Stark's latest prototype Iron Man armor.

The boy and inventor quickly developed a rapport. After providing supplies, Harley showed Stark to a location that had been the site of an explosion with a rare thermal signature, and then to a woman whose son had been the cause of the event. That meeting did not go as planned, with Stark encountering Ellen Brandt and Eric Savin, two Extremis-infused agents also intent on finding the woman. The ensuing fight spilled back outside where Savin encountered Harley and used him as a hostage to ensure Stark's compliance. Harley was able to break free from the situation using a flash grenade that Stark had supplied earlier as a bully-deterrent.

Despite the boy's earlier assistance, Stark left him by the roadside while he drove away to pursue the mysteries he was chasing. Hayley's persistence in communicating with the inventor had a fortunate outcome while the two were in telephone communication. He snapped Stark out of an anxiety attack by pointing out that Tony's nature was to be a mechanic, and therefore he should simply build something. That gave Stark renewed focus and drew him back to Harley's garage to improvise a new series of gadgets with which to give him an edge while his armor was out of commission.

After Stark left to continue his vendetta, Harley was left to continue his mundane life. Not long after the encounter with the wayward mechanic, he came home from school to find his garage packed with new equipment, from computers to robotics and was overjoyed. On a table was a more personal gift with a placard that read, "Potato Gun Mark II" and regards from "The Mechanic," Stark's alias.

Retrieved from "https://marvelcomicsfanon.fandom.com/wiki/Harley_Keener_(Earth-1010)?oldid=98878"
Community content is available under CC-BY-SA unless otherwise noted.