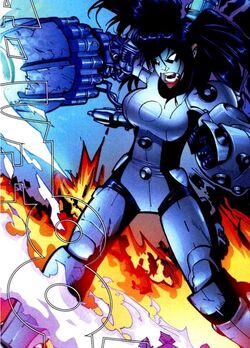 I'm always keen towards improvement, all for the betterment of our kind... Unfortunately... Even someone so powerful and so wise like you you seems to lack it, just like the rest of them... Cowards...

Hard-Drive was a hyper-intelligence-based, cybernetically-enhanced, female mutant with an unclear early life and origin, albeit her tragic origin had made made her extremely various, continuously searching for a perfect opportunity to get her personal revenge against humankind. Hard-Drive was also one of the members of the rogue society of Magneto's Brotherhood of Mutants. Playing one of the most important roles within the mutant terrorist society, Hard-Drive consistently acts the "eyes in the skies," or the master surveillance of their headquarters inside and outside the island of Magneto's Citadel, Genosha. Additional to that, she also serves a much larger role towards the society of Citadel, helping its civilization's technology grow and develop from time, thanks to her remarkably astonishing scientific and technological aptitude and natural desire towards the concept of improvement, not only to herself, but also towards the community of Genosha.

The infamous and notorious villain of the X-Men known as Mister Sinister would intentionally led most of Magneto's loyalists into causing wreak and destruction on the city of Novi Grad, in Sokovia, without having any orders from Magneto, which immediately has gotten the attention of the X-Men. Little did they know, this strategy was one of the first known steps of Essex's plan as he would later unleash a larger event along with some the Earth's most powerful and villainous leaders, leading the Great Superhuman Movement.

Thanks to Essex's being a genius and having great scientific aptitude and knowledge on studying Mutants and having the ability to enhance their very mutation to a next level, which have impressed Magneto and the rest of Genosha's residents, including Hard-Drive herself, who unhesitatingly had switched sides with Sinister even before he decided to come clean towards Magneto into taking over the half of the Brotherhood for himself and his fellow allies, with her believing that Sinister's leadership and guidance on Genosha would not only help its grow a larger community of mutants and let them be known into the world, but also make them realize that are the mutantkind, are indeed, the true and destined race to be placed in "top of the food chain" instead of humans, all with the help of the Movement Alliance.

Along with her ungrateful betrayal, Hard-Drive was also previously requested by her new leader to have the selected members of the Brotherhoo and half of Genosha's population have their craniums be unknowingly implanted with a "nanochip" decive made from her own design serving as a tracking device, just in case they may get lost all of the sudden or in worse cases, kidnapped. Though this action might have been done out of safety for the citizens of Genosha, the nanochip device also contained an unknown chemical substance, and a lethal sedative that has the special ability to manipulate five of the brain's chemicals at her own will, to which she had activated during the uprising of the Movement, brainwashing those who were unlucky, having been implanted with the nanochips.

More saddening enough, the nanochip device also contains a deadly explosive, which could be triggered at anyone who seemed into having hesitations, or to those who strongly repents in joining the despotic cause of Sinister. In the consequences, the heartless Hard-Drive had sadistically executed those who were unfortunate to be implanted with the device, carelessly dropping a countless pile of bodies, all around the island, both preventing every innocent mutant citizen from fleeing the island, and those who remained their loyalty to Magneto (although with the exception of a few members of Magneto's loyalists, including Juggernaut, Mystique, Pyro, and a few more whose nanochips were secretly destroyed by Magneto moments before its activation, or those who haven't been implanted with the device in the first place).

She was unexpectedly killed in the final conflicts of the Movement, specifically during the Battle of Genosha by the savage X-Man Wolverine, who went into a sudden fit of rage often known as his berserker state, strongly tearing most of her body's cybernetic implants apart and brutally slashing the rest of her body's remaining biological parts into shreds without any hesitation, killing her slowly, and painfully. By her death, the lives of those whom she held responsible for killing intentionally and sadistically during the event, were finally avenged and justified in the very end, once and for all.

In the aftermath of Ultimate War, Hard-Drive's shredded, rotting corpse was found inside the temporarily-abandoned Citadel by a group of Hydra operatives, who were all under the disguises of investigators sent by the C.I.A., though the latter has yet to visit the island for another few days. Along with it, her hidden laboratory, located beneath the dungeon of the Citadel was accidentally found by the same men. Inside her laboratory, the operatives were ordered to inspect the entire room, where they had all of her finished and unfinished scientific works collected, including three brain samples contained inside a glass jar (which were actually her bio-organically-replicated brains, as stated according to her own classified worksheets, which were also collected), due to reasons unknown, before leaving moments afterwards.

Homo Superior/Cyborg Physiology: Hard-Drive was an potentially powerful mutant who has the power to merge bodily with technology, downloading information contained therein into herself or adapt its machinery into his bionic parts. Hard-Drive also used a cybernetic frame capable of scanning his environment with sophisticated sensors, fire concussive blasts, and teleport over long distances.

Retrieved from "https://marvelcomicsfanon.fandom.com/wiki/Hard-Drive_(Earth-61615)?oldid=227920"
Community content is available under CC-BY-SA unless otherwise noted.