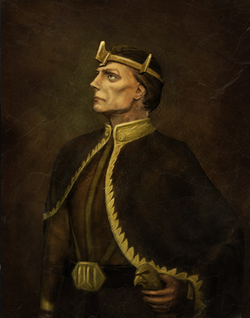 Harbin Zemo was a famed war hero, and is often considered the "first" of the Zemo bloodline. Harbin entered the realm of legend when, 1480, he single-handedly confronted an invading horde with nothing but a sword. Zemo slew every single invader, and the people rewarded him by promoting him to nobility, effectivly making him the first Baron Zemo. He commissioned to have a castle built in the remote mountains, Castle Zemo, which past through his family over the years before Arnim Zola and Hydra took it over as their base of operations, though it's true purpose was kept secret from all but those of his bloodline.

The Castle was constructed with the intention of discovering something ancient beneath the castle known as the "Sleeper", a cause which the Baron found undeniably vital. He continued to oversee upgrades to the Castle's design that were many years ahead of his time, but sadly would not live to see his quest come full circle. Two Barons later, Baron Heller Zemo would be the one to discover the Sleeper.

Retrieved from "https://marvelcomicsfanon.fandom.com/wiki/Harbin_Zemo_(Earth-1010)?oldid=107815"
Community content is available under CC-BY-SA unless otherwise noted.