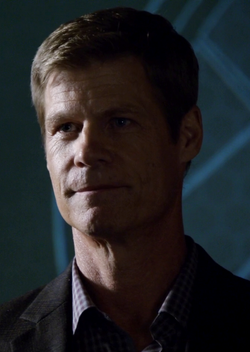 Agent Cameron Klein was one of the deceased S.H.I.E.L.D. agents selected to be a test subject for the T.A.H.I.T.I. project, a program envisioned by Director Fury to revive a fallen Avenger. While the program was initially a success, the effects of the GH.325 serum drove Klein and the other test subjects insane as they became increasingly obsessed with a series of mysterious glyphs. The head of the project, Agent Phil Coulson, came up with the idea of "erasing" the test subjects by implanting them with false memories and giving them new identities. Cameron Klein was given the identity of Hank Thompson, a welder, and eventually married and had a son.

Years later, Hank Thompson was tracked down by Sebastian Derik, another former T.A.H.I.T.I. test subject who was hunting down and killing the others. Hank could not help him understand the glyphs, but Derik did not leave. Not long after, the now-director Coulson, who had since been revived through the T.A.H.I.T.I. project, arrived at Thompson's house, and demanded at gunpoint he tell him everything he knew about the ruins. Once Thompson told Coulson he could not help him, either, Derik sneaked up behind Coulson and knocked him out. Derik then tied up Coulson, Thompson, and Thompson's family in Thompson's barn where he and his son had assembled a model train set. While Derik was taunting Coulson, Thompson managed to cut out of his ties and went to free his family. However, Derik noticed his prisoner was escaping and threw his knife at him, but Thompson managed to catch the blade in mid-air and throw it back at him. Derik dodged the knife, but it cut through Coulson's bonds. Thompson and his family escaped the barn while the two of them were fighting. Once S.H.I.E.L.D. had subdued Derik and handed him over to the authorities, Coulson offered Thompson a position as an agent. Thompson refused, and returned home to his normal life.

Retrieved from "https://marvelcomicsfanon.fandom.com/wiki/Hank_Thompson_(Earth-1010)?oldid=98333"
Community content is available under CC-BY-SA unless otherwise noted.