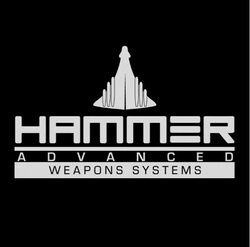 Hammer Advanced Weapons Systems is a weapons manufacturing company led by CEO Justin Hammer and is rival of Stark Industries. In the wake of Stark's withdrawal from arms manufacture, Justin Hammer moved to fill the void securing some lucrative defense contracts in the process.

After unsuccessful attempts to copy and replace Stark's Iron Man armor, and the demand from costumers for armors and exoskeletons, Justin Hammer had Ivan Vanko freed from imprisonment in order to work on Hammer armor designs. Vanko had other plans however and redeployed his efforts towards making unmanned humanoid drones.

Hammer also gained access to an Iron Man prototype confiscated from Tony Stark by Lt. Colonel James Rhodes. The United States Air Force were intent on making the suit combat ready and enlisted Hammer to facilitate the upgrades. The result was an extensive refit, with a number of conventional weapons grafted into the suit's structure and systems, and was re-branded as War Machine.

Hammer's relationship with Vanko went sour after the Russian betrayed him by exploiting the drones as agents of revenge against Stark. Hammer's complicity in Vanko's jailbreak and the resulting damage caused by the rogue drones saw the Hammer CEO arrested, leaving the company leaderless and facing a mountain of bad press.

Retrieved from "https://marvelcomicsfanon.fandom.com/wiki/Hammer_Advanced_Weapons_Systems_(Earth-1010)?oldid=144520"
Community content is available under CC-BY-SA unless otherwise noted.