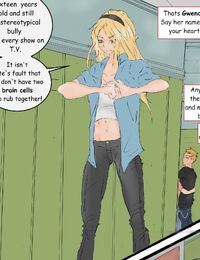 Young, smart, tough, and charismatic, Gwen Stacy was known to be a science geek to everyone and always made Straight A's. Before entering high school, Gwen became close friends with fellow science geek Peter Parker and they did homework together, and they began to have crushes on each other.

Gwen then attended Midtown High School with her best friends Peter, Liz Allen, Eddie Brock, and Harry Osborn. Gwen was known as a brilliant student, She usually expresses her true feelings, and she can even be short-tampered sometimes and has even physically attacked some of the bullies at her school. When she sees Peter getting picked on by his jock rival, and her ex-boyfriend Flash Thompson and stands up to him, showing how Gwen really cares for Peter. At one time, Gwen expressed her wish to become a scientist, but now dreams of being a police detective like her father once was. Gwen now interns at the laboratory of Martha Connors at Empire State Univeristy along with Peter where they joined Eddie Brock, and other interns. When she found out that Flash was on the verge of failing most of his classes, she convinced him to be tutored by her and Peter despite Flash and Peter hating one another. Later on, Peter calls her and blows off their movie date. And later down the line while they're still dating, Peter ran off yet again and left her alone at the carnival when it was being attacked by a metahuman known as Electro. This was the only time she would ever really be against Peter and breaks up with him the night after and hopes that he can figure himself out.

Eventually, Gwen became the first person to learn of Peter's secret identity as Spider-Man and the first Peter revealed it to. Confirming her suspicions that Peter could be Spider-Man all this time and even admitting to him that she was correct all along. Gwen than figures out that Peter was just trying to protect her and forgives him of his actions and his identity. This bring their relationship closer and the two began dating again. Although Peter's secret identity will prove to be a heavy burden on their relationship.

While returning home, both Gwen and her mother noticed large police presence. Gwen rushed to find out what happened, but the police was there to deliver Captain Stacy's badge to Gwen. It was revealed to her that Capt Stacy was killed by the Green Goblin while trying to save a little boy from harm's way. Later, Peter began to fear for Gwen Stacy's safety more than ever when the Green Goblin kidnapped her in a twisted attempt to gain Peter's allegiance and flung her off the George Washington Bridge. Gwen survived, but was left traumatized and ended their relationship out of fear for herself and her family's safety.

Gwen possessed the normal strength of a girl her age who participated in moderate exercise.

Mortality: Gwen is an ordinary human, she can get hurt by weapons or falling.

she's also a fan of Lord of The Rings.

Retrieved from "https://marvelcomicsfanon.fandom.com/wiki/Gwendolyne_Stacy_(Earth-981)?oldid=254775"
Community content is available under CC-BY-SA unless otherwise noted.