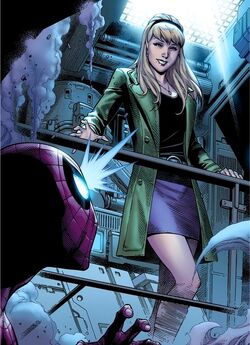 Every person on this whole goddamn planet is counting on you, Peter Parker! Promise me, you'll keep on doing your job, okay? Make me proud... Even if I'm no longer with you...

Although Gwendolyne Maxine "Gwen" Stacy officially first met Peter Parker while they were schoolmates at Midtown High School, their relationship wouldn't even further develop until they became much and much closer in their college years at Empire State University. Initially, Peter's secret problems as the vigilante Spider-Man made him ignore her advances, and in return, she felt insulted by his aloofness. Gradually, however, a romance developed between the two as time went on.

Gwen, who was a science major, mainly appreciated Peter's intellectual and goofy but amusing personality, different from that of jocks like Flash Thompson and preppies like his best friend Harry Osborn. Because of this, she became Peter Parker's first true love. At some point in time, Gwen eventually figured out that Peter was Spider-Man after all, and later on, the two eventually confessed their feelings for each other, officially starting their romance together as a couple, a relationship that lasted throughout their whole years in college and Peter's journey as the heroic and noble web-slinger of New York City.

Unfortunately, tragedy strikes when Gwen's own father, George Stacy dies from his injuries trying to save a child from falling debris only a week after she graduated from university, which is the result of a battle between Doctor Octopus and Spider-Man. George reveals to Spider-Man that he knows his identity and charges Peter with taking care of his daughter. Gwen, however, moves to London to live with her aunt and uncle and continue her recovering life there in the meantime.

Before she left, Peter tries to propose to Gwen for the sake of committing and supporting her but she sadly rejected him, saying that she doesn't feel any happy for anything surprising, since his father's death. Several months later, Gwen returns to New York after taking his uncle's advice, only to see things have changed after her disappearance.

At one very evening, the Green Goblin Gwen, who was at Peter’s home waiting for him at that very moment, with the intention of trying to have a closure with Peter for their undisclosed relationship hiatus. Spider-Man then tracks the Goblin to the Brooklyn Bridge, where a chaotic and destructive fight ensues and the Goblin unhesitatingly and sadistically throws Gwen off the side of the bridge to take his own advantage over Spider-Man.

Spider-Man shoots a web line to catch the falling Gwen, but the jolt from the sudden stop appears to snap Gwen's neck and spine, ending her life in a flash. With Peter going down below to check on her, he then cradled her lifeless body and wept after finding out that she was gone. Her funeral was attended by many people including her friends and family, Peter and his Aunt May, who also knew Gwen since she was a child growing up in their neighborhood.

To this day Peter still feels guilty for her death in most of times, in the same way he feels remorse for his Uncle Ben's death and his failure to save Gwen's own father, George. Enraged by the Goblin's actions, Spider-Man continues fighting the Goblin on the bridge, which ended in Osborn's defeat and apparent death. The death of Gwen Stacy had enormous effects and impacts on everyone she knew. Mary Jane, a close friend of Gwen Stacy ever since they were children, was deeply affected by Gwen's death.

Gwen's death also drew Peter and Mary Jane into an intimate friendship, and eventually a romantic relationship, although the latter would later end due to their mutual realization that Peter's temptation to be with Mary Jane while Gwen wasn't around had subsequently caused the irreversible fracture to his and Gwen's relationship to begin with. Because of it, the two chose to end any further romantic entanglement between them.

Almost a year since Gwen passed away, Peter felt that he was unable to carry the burden of being Spider-Man any longer and considered retiring from super-heroics after all the past years he'd been through, losing a few of his loved ones and failing to save countless of lives, including Gwen herself. Because of this, Peter started working as a scientist in Horizon Labs, when he stumbled upon three of his fellow researchers who were caught in an accident when he was experimenting a quantum-based engine.

In an impulsive act to help his colleagues escape the lab room while he finds a way to stabilize the engine and keep it from going critical. Peter was sent back in time, finding himself wearing his Spider-Man suit on the top of a damaged Brooklyn Bridge battling the Norman Osborn, back to the night when Gwen Stacy was going to die. This time, Spider-Man successfully saves Gwen not by letting her fall, but by leaping down in time to catch her. Because of this consequential action of him, the timeline of this reality was unknowingly reshaped. Knowing that Gwen was safe, Peter immediately clutches on Osborn, to which he ended up defeating the latter by unintentionally beating him into a pulp until he was in a critical shape, before being handed over to the classified authorities. Seeing how ruthless Peter was when he finally defeated Osborn, she became ultimately concerned with him, with Gwen eventually figuring out that he was hiding something from him at the meantime.

With Peter was hoping that everything was better now that Gwen was still alive, he came to continue his new life both as Peter Parker and Spider-Man. That was until, he was suddenly warned by a mysterious man (disguised as a crazed, delusional, hobo) who simply calls himself Marcus, telling him that the following events that would occur would be unpleasant for him and the structure of time and space itself if he does not revert everything back to normal. At first, Peter seemed to ignored his warnings, but the latter would later became internally conflicted when he and Gwen started experiencing anomalies reoccurring in their reality, causing the deaths of his friends, heroic allies, and villains alike across the country caused by different factors they couldn't explain.

In the end, Gwen herself has convinced Peter that he was and still should be the friendly neighborhood Spider-Man that everybody in the world needs, asking him to promise her that he won't stop on doing his heroic job as long as his heart wills it so, even if she would be gone, revealing that she finally knew what was supposed to happen to her, as she had been previously told by Marcus. The two then embraced and kissed passionately as they say their final goodbyes to each other.

Due to a causal loop unexpectedly summoned by the anomalies of reality, both Peter and Gwen were sent back to the moment of that very night. Comforting Peter that she'll be alright one last time, she willingly calls off Osborn in mockery fashion, which led to the villain grabbing onto her and pushing her off from the top of the bridge, repeating her demise for the final time. And with her sacrifice, the timeline of this reality returned back to the way it was supposed to be.

Retrieved from "https://marvelcomicsfanon.fandom.com/wiki/Gwendolyne_Stacy_(Earth-61615)?oldid=224914"
Community content is available under CC-BY-SA unless otherwise noted.