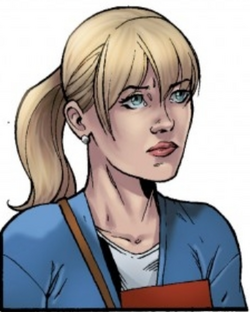 Smart, charismatic and rebellious, Gwen is the chief intern at OsCorp, a position she takes very seriously. She meets Peter one day when she saves him from being bullied by Flash Thompson, and talks with him later in one of their mutual classes. Even before this, Peter developed strong feelings for her, even cropping one of his photos of the debate team so that only Gwen was in it and then using it as his computer home screen, something his uncle, Ben, found amusing.

When Peter went to Oscorp to meet Dr. Connors, Gwen ended up seeing him. Suspecting trouble, she later kicked him out, but not before a genetically-altered spider crawled into his shirt and bit him.

After Peter's confrontation with Flash, he ended up awkwardly getting a date with Gwen for dinner at her house. Peter ended up causing a small scene when he tried to give Gwen misshapen flowers and defended Spider-Man in front of her father, Captain Stacy. She took Peter out to get some fresh air, where Peter revealed that he was Spider-Man. The two ended up kissing a few seconds later and began a serious relationship.

After it was discovered that Curt Connors was The Lizard, Gwen aided Peter in producing a cure. Captain Stacy, was later killed by the Lizard in an attempt to aid Peter in defeating him. After Connors was cured, Captain Stacy made Peter promise to break up with Gwen and leave her out of his life, as it was too dangerous.

Gwen quickly caught on that her father was the reason for Peter breaking up with her, and the two began dating again shortly after.

Retrieved from "https://marvelcomicsfanon.fandom.com/wiki/Gwendolyne_Stacy_(Earth-1010)?oldid=100004"
Community content is available under CC-BY-SA unless otherwise noted.