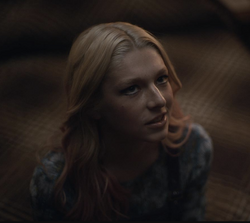 Earth-101
Base Of Operations
Her Dorm Room
Characteristics
Gender

You know, if I had spider powers, I would simply not act like an idiot while using them.

Gwen Stacy grew up with her father in West Virginia. She always looked up to him and how he always did what he could to uphold the law, and they were always extremely close because she had no siblings, and her mother died when she was a baby.

During Gwen's senior year of High School, her father transferred to the New York Police Department, and she was forced to transfer schools. She kept her head down and tried to make it through the year unscathed. About halfway through, she met Mary Jane Watson, who embraced her as her best friend. After graduating, the two of them enrolled in Empire State University where they became friends with Peter Parker, Harry Osborn, and Flash Thompson.

Gwen and Peter were both later selected to work for Dr. Curtis Connors in his lab, which was a dream come true for Gwen, as she always wanted to be a scientist. While they worked together, Peter developed a crush on her, only for Gwen to tell him she was in love with Mary Jane. From there, the two became best friends, and Gwen was even able to deduce that Peter was Spider-Man. He initially freaked out, but she promised not to tell anybody.

[[Category: In a Relationship with Mary Jane Watson Characters]]
Retrieved from "https://marvelcomicsfanon.fandom.com/wiki/Gwendolyne_Stacy_(Earth-101)?oldid=249322"
Community content is available under CC-BY-SA unless otherwise noted.