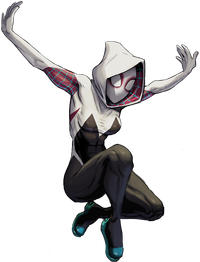 Gwen has the same early history as that of her Earth-65 counterpart.

Spider Physiology: Gwen's powers are similar to those of Peter Parker of the Prime Marvel Universe, after a Radioactive Spider bit her, granting superhuman strength, speed, toughened flesh, and numerous arachnid-like abilities. Her powers included:

Martial Arts Combat: Gwen trains in an after school Karate Class and a good combated fighter.

Equipment: Web-Shooters: Given to Gwen by Janet Van Dyne. They trap moisture from the air to create a "web-fluid" that allows her to eject web ropes, nets, and globs.
Transportation: None known.
Weapons: None known.

Retrieved from "https://marvelcomicsfanon.fandom.com/wiki/Gwendolyn_Stacy_(Earth-16160)?oldid=234526"
Community content is available under CC-BY-SA unless otherwise noted.