Start a Wiki
"Guardian Angel" is the twelfth episode of Assemble!'s Season Six and the one hundred and forty-third episode overall.

Warren Worthington III opened his eyes. He blinked repeatedly, trying to get used to the bright light that surrounded him. He looked down at his hands and noticed an IV on his left arm. He was definitely at a hospital… Again. How did he even get there? His wings had been missing since Ultron obliterated them. Two years was a lot of time of inactivity. Suddenly, he heard a quick flap behind him. Angel turned his head and then, he saw them. His magnificent, white wings were extended at full length.

-What?- He whispered to himself. Slowly, he sat up and unplugged the medical serum from his IV. His bare feet touched the cold hospital room floor, but he didn’t care. Finally, he had his wings back. He could go back to being an active superhero. He opened the windows and looked out. The height was considerable, but he was in ecstasy. Carefully, he stepped on the window frame, extending his wings behind his back. Closing his eyes, he took a leap of faith.

When he opened them again, he was back at the X-Mansion. Desperately, he put his hands on his shoulder blades. His wings weren’t there anymore. Of course, it was too good to be true. It had all been just a dream. He tried to fall back asleep, hoping he could continue it, even if it wasn’t real. To feel the wind brushing against his face, to feel the adrenaline of not touching the ground. However, it was impossible. Giving up, he stood up and walked to the lab, where Beast was working.

-What are you doing up so late?-

-It’s the life of a scientist, Warren.- The furry X-Man shrugged, walking over to a test tube containing a bright green substance.

-Have you found a way for me to get my wings back?- Angel inquired.

-Oh, no. I’ve been so busy!- McCoy exclaimed, mixing the substance with another, this one of a sparkling blue color.

-Busy? I’ve been waiting for these wings for two years!- Warren exclaimed, bringing his fist to his chest.

-I’m so sorry, Warren!- Hank apologized. -St. John’s condition is… So incredibly complex. And extremely lethal to mutants. I cannot let it be spread. Please, understand the urgency of this work.-

-I’m sorry. But this is my number one priority… And the Professor’s.-

Worthington nodded. -I get it. I’m not a priority.- The young mutant turned around and walked out of the lab.

If he had been unable to sleep before, now it was practically impossible. Now, it wasn’t just longing the wings… Now it was… Rage. Powerlessness.

Suddenly, a huge, tall figure appeared in front of him.

-Oh, great, I fell asleep and it’s another dream.-

-It is not a dream, my child.- The other one shook his head. -I have come to your aid.-

-I’m sorry, but it sounds like you’re messing with me. What are you? My Godmother?-

-I am not sure if that is supposed to be a joke. Things have changed since I last roamed the Earth.-

-I am En Sabah Nur, the First Morning Light, the Eternal One… The First Mutant.-

-W-Why are you here?- Angel asked, sitting up.

-As I said, I have come to your aid.- Apocalypse took a step forward. -I am here to give you your wings back.-

Warren’s eyes widened. -How can you… How? They were disintegrated.-

-All will be revealed, my child. Nothing is impossible for Apocalypse.- The mutant held his hands out at the young one and extended his fingers, turning into metal tendrils that dug painlessly into Angel’s back. When Apocalypse withdrew the appendages, two strong, metal wings pierced through Warren’s skin, as his appearance changed radically. His skin turned light blue, and a dark blue and magenta armor generated itself around his body. -Rise, my Angel!-

-Finally.- Warren smiled, flapping his new wings. -What should we do about the X-Men?-

-They did not give you your wings back. We’ll take everything from them.- Apocalypse smirked.

-Please, let me face them alone. I want them to remember my face when they die.-

-Very well, my Angel. You know where to find me.- En Sabah Nur nodded, teleporting away.

The digital clock on Warren’s bed stand struck 5 AM and Moira MacTaggert walked inside his room to check on him. As soon as saw the unknown figure, she screamed, dropping the tray she had brought him.

-What are you?- She cried, stepping away from the figure.

-Don’t you recognize me, Moira? You’ve been checking on me at 5AM every day for two years.-

-Angel?- She asked, not believing her eyes.

-No… Now… I am Archangel.- He extended his right metal wing, firing blades at the doctor. The weapons pierced her lab coat and pinned her against the wall. Warren walked to her, holding her razor sharp wing under her chin. -You couldn’t give me my wings back… Now someone did… And you’ll pay for it.- He was ready to kill her when Beast kicked his chest, pushing him away.

-You didn’t have time to research a cure for me… But you have time to aid MacTaggert… Funny, isn’t it, Hank?-

-Warren, what’s gotten into you?-

-You could say… The First Morning Light did.- Archangel flew towards Beast, who leapt over him. Worthington stopped himself before crashing against the wall and turned around gracefully. Hovering over the other mutant, Warren fired his wing blades at him. However, another figure got in the way, as his skin was pierced by the blades.

Wolverine pulled the weapons out of his body and looked up at Archangel.

-Look who’s here! The overhyped X-Man!- Archangel swung his wing at Logan, who stopped it with his adamantium claws.

-This is impressive…- Beast commented, seeing with how much ease Archangel’s wings could resist the strongest metal on Earth.

Havok ran forward, channeling his cosmic radiation energy and firing a powerful blast at the winged figure. However, he covered himself with his wings and was completely unharmed.

Storm’s eyes went white, as she charged her hands and fired lightning at the metal wings, expecting them to conduct the electricity.

-This isn’t metal like any other, Ororo… It would have been very dumb to do that knowing you can manipulate electricity.- Archangel laughed.

-Warren… Who did this?- Professor X asked.

-This is a kind of power you have never faced before, X-Men. This is a mutant with powers beyond your imagination… And this is just the beginning. Regroup, get a bigger team. You will need it.- Archangel suggested, before flying away from the Mansion.

Archangel flew inside Apocalypse’s base and the First Mutant stood up, where Famine was waiting. Looking at his two Horsemen, En Sabah Nur smiled pleased.

Angel wakes up in the hospital

"Have you found a way for me to get my wings back?"

"Busy? I’ve been waiting for these wings for two years!"

"It’s just… Now how long will I have to wait? Two more years? Maybe more?!" 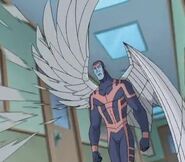 "This is a kind of power you have never faced before, X-Men. This is a mutant with powers beyond your imagination… And this is just the beginning. Regroup, get a bigger team. You will need it."

Death joins Famine
Add a photo to this gallery

Retrieved from "https://marvelcomicsfanon.fandom.com/wiki/Guardian_Angel_(A!)?oldid=183664"
Community content is available under CC-BY-SA unless otherwise noted.